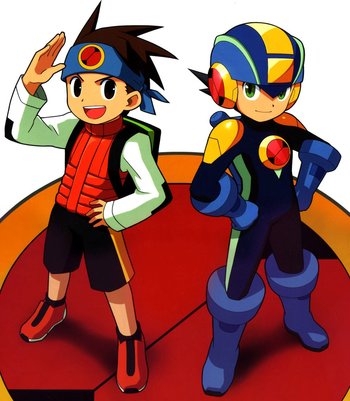 The Mega Man Battle Network game series is a spinoff/reimagining of the Mega Man series. Its basic premise is "What If the Mega Man universe had a major technological breakthrough in computer networking instead of robotics?" (like in our world). MMBN is set Twenty Minutes Into the Future where everything is completely run by the Internet and life is more-or-less peaceful. Everything—cars, refrigerators, schools, the weather -- literally Everything Is Online.

The programming required to run everything has gotten so complicated that humans cannot comprehend it by themselves. So they've created helper Artificial Intelligences, called Network Navigators ("NetNavis" or "Navi" for short).

The stars of the series are 10-year-old (at the start of the series) Lan (Netto) Hikari and his Net Navi partner, MegaMan.EXE (Rockman.EXE).

Since power in this universe is through the Internet, public enemies are those who would conquer or destroy it. Viruses are monsters that must be destroyed, and hackers are able to control all of the things mentioned above that the Internet is connected to. (Even the Mafia is Internet-based.) Lan and MegaMan, being the main characters, have to face these forces off.

The "Real World" and the Internet are separated from each other. Lan can help MegaMan out by giving advice and "battlechips" that grant special powers, but he is more or less isolated from the action. (Unless the part of the Internet that is being affected controls the environment he is currently in, like a runaway train, a cruise ship, the oven of his house, etc.)

The series is best known for its unique battle system. It's complicated in theory, yet simple in practice. Combat is conducted on a three-by-six block grid, with MegaMan on the left and his enemies on the right. When your meter fills up, you can select a certain number of battle chips to blast your enemies in real time while dodging their attacks. They can damage, heal, claim more territory for you, damage or remove enemy territory, summon assistants, and a host of other effects. Those are the basics, at least. It would take far too long to explain all the little clever details and tactical considerations (and insane unstoppable ultra-combos), so those interested should watch some videos to have a better idea of what it's like.

The series lasted for six games before concluding. It spawned a sequel series focusing on radio waves and set 200 years in the future, Mega Man Star Force.

There are several attempts to make a fan-game continuation. The most progressive one in the developing, that mimics the original games in 99% is Mega Man Battle Network Chrono X; being programmed in GML (Game Maker's Language). This game is freeware and only for PC with Windows XP or greater OS.

Several Robot Masters have two counterparts. Slash Man has a lookalike counterpart in BeastMan.EXE who would've probably been his only counterpart if Capcom hadn't insisted on continuing the series after Mega Man 3, which eventually gave us the radically dissimilar SlashMan.EXE.

Another example of this is Magic Man, who has both MagicMan.EXE and the much more comparable HatMan.EXE.

Don't forget about Zero.EXE, Colonel, and Iris. Or Glyde.

Duo is perhaps the one flaw in the For Want of a Nail explanation of the universe. While the Nail may explain deviations on earth, Duo hails from space, where the Nail doesn't reach.

Some NetNavis are infamously dissimilar to their Robot Master counterparts. CutMan.EXE, on the other hand, is identical save that big ol' C across his chest. QuickMan, likewise is just a slightly fancier version of his original.

Ring is a Gender Flip of Ring Man.

The Big Guy: two for each team: MagnetMan/KnightMan for defense, and NapalmMan/TomahawkMan for offense.

The Smart Guy: Again, two per team: GyroMan and SearchMan/ShadowMan and NumberMan. All four specialize in recon in different manners.

The Chick: Meddy/ToadMan. Have supportive abilities.

Glyde (who does absolutely nothing) and Roll (who gets a Big Damn Heroes moment, to her credit) in BN2;

KingMan and almost Glyde and Roll in BN3, but it's decided that they would just get in the way, even though Yai and Glide made it just as far in the N1 Grand Prix as Dex and GutsMan.
*** What's really funny is that Yai points this out, but then goes along with their decision in the end, since Glide's strength is Yai's massive load of rare chips, rather than his own power.

Retrieved from "https://allthetropes.org/w/index.php?title=Mega_Man_Battle_Network&oldid=1948854"
Categories:
Cookies help us deliver our services. By using our services, you agree to our use of cookies.