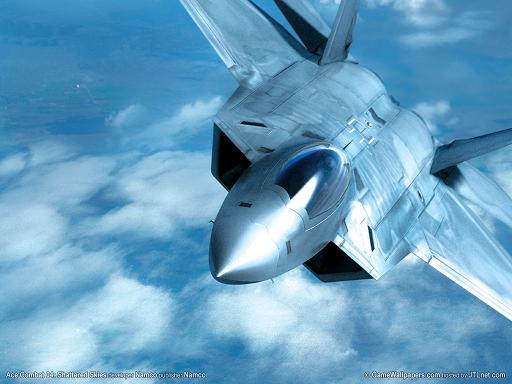 Focus. Control. Conviction. Resolve. A true ace lacks none of these attributes. Nothing can deter you from the task at hand except your own fears. This is your sky.

Ace Combat is a series of arcade-style combat flight games, involving flight simulation levels of graphical detail but without all the fiddly realistic controls; the play style is something between Shoot Em Ups and and the Action Game. The games are semi-realistic, featuring real-life aircraft and such things as planes stalling if they slow down too much, but combined with aircraft that carry hundreds of missiles at once and unlimited fuel. They take place in an alternate reality Earth named Strangereal, one similar to and yet very different from our own.

Also worth mentioning is The Sky Crawlers: Innocent Aces for the Nintendo Wii, a Licensed Game of the Sky Crawlers anime. Though it has no direct ties with the Ace Combat universe, it was created by the same team and features the same arcade-simulation air combat feel; as a result, many fans see it as a Spiritual Licensee.

In 2011, the Strangereal series, specifically the third installment Electrosphere, seems to have been retconned into the United Galaxy Space Force series, also tentatively known as Namcoverse. Said series seems to unite many of the futuristic games previously released by Namco, where the Strangereal games are the chronologically earliest installments. However, since there is still no official information available in English, details on this are very sketchy.

The original/main continuity of the AC series is set on the Constructed World of Strangereal. The first two games were originally not really part of it but have since been retconned to appear that way.

Tropes used in Ace Combat include: