GoShogun (戦国魔神ゴーショーグン, Sengoku Majin Goshōgun) was a super robot anime series produced in 1981 and aired in 1982 in Japan. It is variously referred to in English as Demon God of the War-Torn Land GoShogun, Warring Demon God GoShogun, Civil War Devil-God GoShogun and Macron 1.

A meteor strikes the Earth and is found to emanate a powerful new energy called Beamler, which is used to power a battle robot, GoShogun, and a teleporting fortress, Good Thunder. The Docouga Crime Syndicate, lead by crime lord Neo Neros, try to steal the secret of the energy from the inventor of GoShogun, but he kills himself rather than let them acquire it. His son Kenta is targeted by Neo Neros next, but he is taken in by the crew aboard Good Thunder, who travel the world fighting Neo Neros's forces with GoShogun. Eventually Kenta learns that he is actually an alien. In the end, Neo Neros's three officers side against him with the GoShogun crew. After he is defeated, Kenta takes GoShogun into space, back to his home planet.

GoShogun has a sequel: a movie GoShogun: The Time Étranger (戦国魔神ゴーショーグン 時の異邦人, Sengoku Majin Goshōgun: Toki no Étranger), released in 1985. The movie takes place 40 years after the series. Remy Shimada, a former member of the Go Shogun team, now an old woman, lies in a coma after a car accident as her former team mates and Docouga generals watch it helplessly. But in the depths of her subconscious Remy goes back to the time of her childhood and youth and fights death along with her five comrades. The movie is strikingly different from the series in its dark and surrealistic tone, resembling the works of Satoshi Kon.

Tropes used in GoShogun include:

Tropes in the series 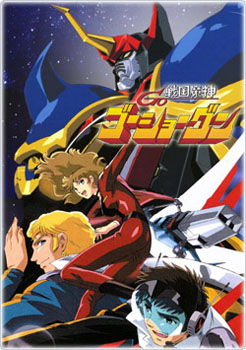 Tropes in the movie 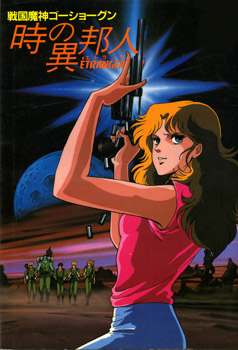 Retrieved from "https://allthetropes.org/w/index.php?title=GoShogun&oldid=1740881"
Categories:
Cookies help us deliver our services. By using our services, you agree to our use of cookies.