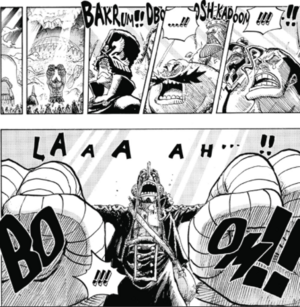 It's very common for a character who just performed a Heroic Sacrifice to be lying with their arms outstretched like the crucified Jesus. The "person with outstretched arms symbolically representing Christ" pose is so deeply ingrained into modern culture that anytime we see a character in that pose, we tend to assume the director was going for this trope, even when it's obvious from the context of the scene that he or she wasn't.

Tends to provoke the joke "[character] died for your sins!"

A Sub-Trope of Rule of Symbolism (unless an example is Faux Symbolism).

Examples of Crucified Hero Shot include:

Retrieved from "https://allthetropes.org/w/index.php?title=Crucified_Hero_Shot&oldid=1864777"
Categories:
Cookies help us deliver our services. By using our services, you agree to our use of cookies.