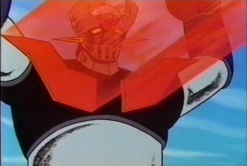 One of the great signature Super Robot weapons, after the Rocket Punch. The Chest Blaster is a heavy weapon, ranging from BFG to Wave Motion Gun in power, built into the chest of a Humongous Mecha. Usually requiring little more than an Asskicking Pose and a vocal command to activate.

Real Robots occasionally have torso-mounted weapons, but these are usually lighter, secondary guns, although some do have racks of missiles mounted in the chest or shoulder. If the Robot is made to look female, well, you know exactly where the missile launchers are.

A Super-Trope to Torpedo Tits.

Not to be confused with Chest Burster.

Examples of Chest Blaster include:

Retrieved from "https://allthetropes.org/w/index.php?title=Chest_Blaster&oldid=1488584"
Categories:
Cookies help us deliver our services. By using our services, you agree to our use of cookies.