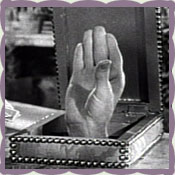 Did you just chop apart the evil zombie or robot you were fighting? Keep an eye on all the parts, because it's only a matter of time before that severed hand starts to spider-crawl after you, or scuttle off for some nefarious purpose.

The body parts in question show an awful lot of self motivation and sensory ability for something that doesn't even have muscles on a human. In the case of spirit-animated necromantic flesh, all bets are off, but it's past believability that all robots are built with a wireless command link and independent power supply for all their limbs "just in case".

See Evil Hand for when this happens before it gets lopped off.

For other lopped off yet functional body parts see: Losing Your Head, Organ Autonomy, and Brain In a Jar.

Examples of Helping Hands include:

Miko: How can a zombie arm move faster than the actual zombie?

Crow:Got a booger on my finger, and I can't get it off!