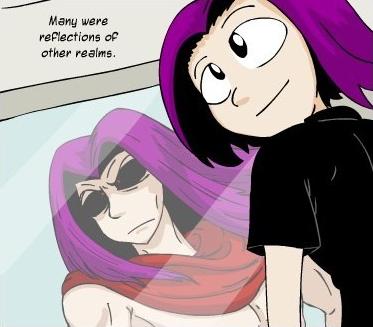 "Picture every gold, silver, bronze and rust age comic. Imagine a comic shop full of every DC comic ever. Now imagine that each one is about the Syndicate, and is about some lone hero rising up, and getting killed.﻿ Every issue is a forensic report of a new hero, alone and outclassed, standing up and getting murdered, brutally, publicly, colorfully, at the rate of one or two a month. It's not that the Syndicate are killers, but killers in equal measure to the heroes. It's evocative."
—qbe9584

Often a subset of Bizarro Universe, it is an Alternate Universe where Good and Evil characterisations are reversed, but is otherwise the same as the "real" universe - except where logically derived from this change in morality. As an example, in Bizarro World, the earth is a cube. In the mirror universe, the earth is a sphere, but the Mirror Self of The Captain has a cool eyepatch.

Occasionally, some other characteristic is reversed. The hero in the Mirror Universe functions as the Evil Twin. The Five-Man Band becomes The Psycho Rangers or Five-Bad Band. Expect the loyal soldier to become a blithering coward, the backstabbing bastard to become a peaceful negotiator, and the bridge bunny who normally gets no lines becomes a trash-talking, lingerie-wearing, gun-toting, bisexually hyperactive ball of unleashed id.

These mirror worlds tend to get popular with the fanbase, who'll eagerly come up with alternate versions of any character not yet shown, and as a result it'll often get returned to and expanded upon to please them. The status quo in the mirror universe is more likely to change than the original one, probably because the writers are allowed to do it.

From the Star Trek: The Original Series episode "Mirror, Mirror". In homage to this episode, it's common for an evil mirror equivalent to have a goatee beard.

Contrast with Dark World. Not to be confused with Mirror World.

Examples of Mirror Universe include:

Owlman: Every decision we make is meaningless because somewhere, on a parallel Earth, we have already made the opposite choice. We're nothing. Less than nothing.
Superwoman: How can you say that? We're rich. We're conquerors.
Owlman: [pointing at alternate Earths] And here we're poor. We're slaves. And here, our parents never met, so we were never born. Here, the world ended in nuclear war. Here, no fish was brave enough to crawl up on land and humans never evolved. And so on, ad infinitum.

Batman: You're Insane!.
Owlman: Does it really matter? There are alternate versions of me that you would find quite charming.

Arthur: They look familiar. Did we play soccer against those guys?
Buster: No way! I'd remember a bunch of goofy-looking kids like that.

Milhouse2: But Milhouse is my name!
Milhouse: But I thought I was the only one!