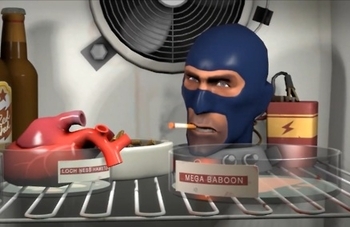 A beheading can be a messy and extremely painful thing to see, let alone experience. While it's been said that, theoretically (It's understandably hard to confirm), consciousness may continue for a few seconds after decapitation, it seems to last much longer in speculative fiction. It has been shown that random brain activity can continue for many minutes, ending in a flurry of activity reminiscent of a brain seizure.

It may be justified for robots, who may have some power source in the skull that keeps them going after being separated from their shoulders, or might not have their core processor in their head anyway. The Undead may also exhibit this ability to have a functioning head and separate functioning body.

The head generally possesses the ability to audibly speak despite the lack of lungs. Robots could probably have their entire vocal system in their head, but anything else should only be able to mouth words. May or may not be capable of independent movement by either bouncing, rolling or levitating.

Sometimes the body will still be functional and capable of independent movement, resulting in the head trying to tell it to pick it up and reattach it. The Fridge Logic that the body has no ears to hear this is rarely addressed.

Related: Head Transplantation, Headless Horseman, Pulling Themselves Together, Appendage Assimilation, and Having a Heart.

Examples of Losing Your Head include:

Retrieved from "https://allthetropes.org/w/index.php?title=Losing_Your_Head&oldid=1951201"
Categories:
Cookies help us deliver our services. By using our services, you agree to our use of cookies.