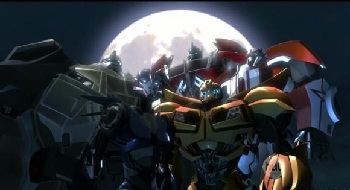 Accidentally caught up in the action and befriending the Autobots are three humans: Jack, Rafael and Miko. They act mostly as Naive Newcomers as they watch the robots battle it out, though they do prove useful in their own way due to the limited number of Autobots.

The show is animated in CGI but carries a bit of a 2-D flair. Here is the opening sequence for the series. The overall look and tone of the show follows closely with the live-action films (with Optimus, Bumblebee and Megatron having similar designs) while it continues to take inspiration from many other Transformers incarnations, and it has inspired a new MMO game, Transformers Universe. By the end of its premiere season, the show has accumulated not only good ratings, but has become one of the most highly-praised incarnations of the franchise for its high production standards in both writing and animation.

Now with a recap page.

Tropes used in Transformers: Prime include:
Retrieved from "https://allthetropes.org/w/index.php?title=Transformers:_Prime&oldid=1858457"
Categories:
Cookies help us deliver our services. By using our services, you agree to our use of cookies.