Everything About Fiction You Never Wanted to Know.
(Redirected from The Sarah Connor Chronicles)
Jump to navigation Jump to search 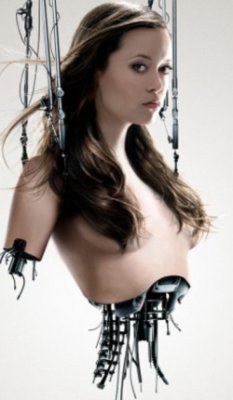 Holy crap, it's the Taminator.

Set after the first two films, and while it acknowledges some plot elements of the third movie, it goes in a different direction. Sarah and John are still on the run from both the FBI, a new Terminator, and their own sorry social lives. That is, until Cameron shows up to bring them from 1999 to 2007 in order to stop SkyNet from being built.

The first season deals with Sarah, John, and friendly machine Cameron on the run from the killer cyborgs. They are soon joined by Derek Reese, John's uncle, who introduces himself by murdering a man who may have helped contribute to the design of his future's SkyNet. This marks the start of the show's headlong dive into murky morality. The foursome set up shop in Los Angeles, where they try to stop the future war and hide from FBI Agent Ellison.

The show then takes a quick swerve with Ellison's growing awareness of the machines and the introduction of a love interest for John. The Big Bad Terminator Cromartie, who has been hunting the Connors since the first episode, is re-appropriated for another, possibly sinister use. The second season started with a Terminator of the Week style, but soon grew more philosophical, eventually turning Darker and Edgier. After completing its second season, it was subsequently canceled. Whether the final season's evolution was to the show's benefit or otherwise is an ongoing matter of debate.

Both seasons are available on DVD, as well as in rotation on the WB's official site. There have been fan petitions to bring it back, but so far none have been successful. In April 2011 Syfy picked up the rights to both seasons and started airing them on April 7, 2011. Interestingly, they advertised it as a "series premiere". As the channel has a history of bringing back shows that got Screwed by the Network, it suggested a possible return for the series, but sadly it didn't pan out, and two seasons was all it ever got.

Tropes used in Terminator: The Sarah Connor Chronicles include:
Retrieved from "https://allthetropes.org/w/index.php?title=Terminator:_The_Sarah_Connor_Chronicles&oldid=1853470"
Categories:
Cookies help us deliver our services. By using our services, you agree to our use of cookies.