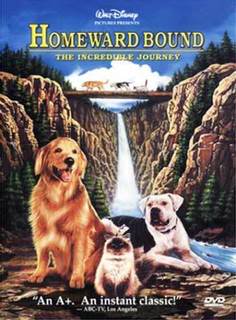 Homeward Bound: The Incredible Journey is a 1993 film produced by Disney. It is live-action with voiceover narration and loosely based on an earlier film called The Incredible Journey, itself based on a 1960 book of the same name by Sheila Burnford. The film was the first one directed by Duwayne Dunham, who would go on to direct such films as Little Giants (1994) and Halloweentown (1998).

It follows a golden retriever (Shadow), an American bulldog (Chance), and a Himalayan cat (Sassy) as they trek through the wilderness of the American northwest to be reunited with their owners. Shadow was voiced by Don Ameche, Chance by Michael J. Fox, and Sassy by Sally Field. The film was a modest box office hit, earning $41,833,324 in the United States market, making it the 34th most successful film of its year.

There was a sequel released in 1996, Homeward Bound II: Lost in San Francisco. Ameche had died back in 1993, and Ralph Waite replaced him in the role of Shadow, while Fox and Field returned to their previous roles. The film was less successful than its predecessor, earning $32,772,492 in the United States market and landing the 53rd spot on a list of the most successful film of its year.

Tropes used in Homeward Bound: The Incredible Journey include:

The original novel contains examples of: