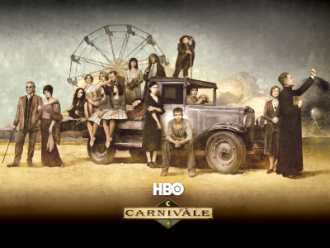 The whole gang in Season One.

A semi-surreal drama set in 1930s Depression-stricken America, Carnivàle casts the epic battle between Good and Evil against a background of the traveling circus and the revival tent. One story line involves an escaped convict with the ability to heal the afflicted and resurrect the dead as he follows a carnival troupe across the country and slowly discovers clues to his Mysterious Past. The other story line focuses on a Methodist minister in California who heeds a call from God to start his own church, awakening his own supernatural ability to manipulate others' thoughts and read their souls. Gradually, the two plots converge for a confrontation on a cataclysmic scale.

Reminiscent of the sinister visual style of David Lynch -- it even features Michael J. Anderson from Twin Peaks -- this sprawling, mega-budget HBO production treads the line between fascinating psychodrama and frustrating gobbledegook. Interference from the network weakened series creator Daniel Knauf's vision, truths were learned at a snail's pace, and the show ends on an excruciating cliff-hanger. But Carnivàle's mythology, production design, acting, and attention to historical detail are stellar. The show won five Emmys in 2004 for best title design, cinematography, art direction, costumes, and hairstyling.

The show was originally intended to be six seasons long, each two seasons comprising one "book" of a trilogy, but HBO canceled the show after the second season due to budget constraints.

Tropes used in Carnivale include:
Retrieved from "https://allthetropes.org/w/index.php?title=Carnivale&oldid=1831789"
Categories:
Cookies help us deliver our services. By using our services, you agree to our use of cookies.