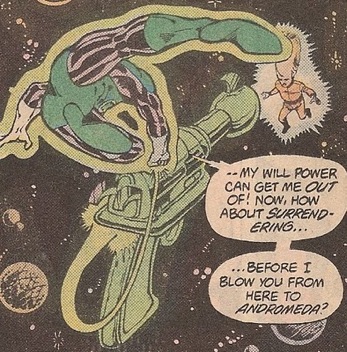 Hal Jordan can make a BFG out of green glow with his mind.

When ordinary light, whether it comes from science-fiction projectors or a magic spell, seems to have (or really does have) actual substance, it's Hard Light. Hard Light objects behave like any other object—chairs support weight, bullets kill, razors shave, and so forth. An illusory person made of Hard Light can pick up real things and interact physically with real people, even though they don't technically exist.

Strictly speaking, Hard Light is not holography. A Hologram is a sort of three dimensional projection. It is not solid. If something is solid, it is, by definition, not a hologram.

That said, it's easy to imagine holography being used in tandem with some other technology (Deflector Shields, perhaps) to produce a projection which seems solid to observers. The Holographic Terminal in its "real world" form comes to mind.

People will usually refer to these constructs as "holograms" for the sake of convenience. If the holograms only seem to manipulate reality because Your Mind Makes It Real, see Cyberspace. Can be used to create a Virtual Training Simulation. See also Hologram Projection Imperfection for when holograms don't work properly and have visual static or other glitches.

If your ray of light is not only hard, but also hot and has incredible cutting powers, you've got yourselves a Laser Blade. See also Pure Energy.

Examples of Hard Light include: