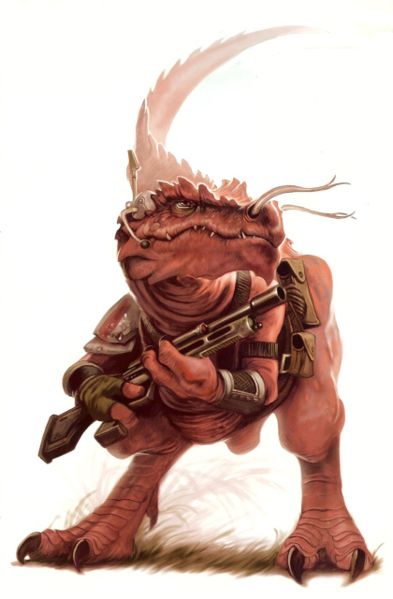 Most Star Wars aliens tend to be anthropomorphic. Ssi-ruuk are carnivorous dinosaurs. Take a guess at what they're like.

A phrase coined by Sci Fi author Robert J. Sawyer, describing a certain way of characterizing extraterrestrial races. Take a terrestrial animal, make it anthropomorphic, bipedal, and sapient, but rather than derive their behavior from humans with the occasional Furry Reminder, instead derive the majority of its characterization and culture from the terrestrial animal's behavior. Sawyer's hypothetical/satirical Intelligent Gerbils live in cities powered by erudite individuals running around in big wheels; they take water from tubes coming out of the walls and sleep in piles of cedar chips.

Could be regarded as the animal version of Rubber Forehead Aliens, except when the non-human psychology clause of Starfish Aliens kicks in. Distinct from Alien Animals in the sense that they're not literally a terrestrial animal, but are obviously inspired by one. Compare Bee People.

For an interesting analysis and criticism of this trope, see this Tetrapod Zoology post.

Examples of Intelligent Gerbil include:

Retrieved from "https://allthetropes.org/w/index.php?title=Intelligent_Gerbil&oldid=1884406"
Categories:
Cookies help us deliver our services. By using our services, you agree to our use of cookies.