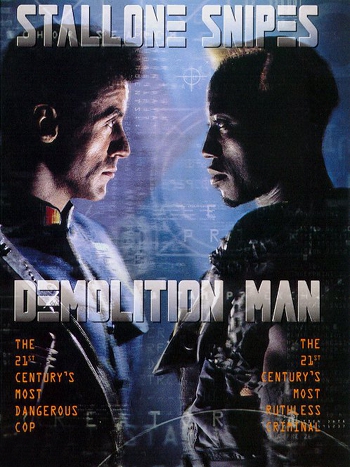 A Sylvester Stallone movie in which he plays loose cannon policeman John Spartan, who is dedicated to hunting down psychopathic and master criminal Simon Phoenix (Wesley Snipes), causing havoc and property destruction every time they face off. This earns Spartan the nickname "Demolition Man". Their final confrontation goes a little too far, resulting in the deaths of several dozen innocent hostages. Luckily Phoenix was finally captured in the chaos, but both men are condemned to Human Popsicle-ization.

Flash forward Twenty Minutes Into the Future (actually 36 years) when Phoenix is released from his ice prison, and proceeds to go on a rampage. Since this brave new world is a parody of Mary Suetopia, Phoenix's old school brutality is unheard of by the wimpy future police and they are easily outmatched. Figuring they need an old school police officer to deal with an old school thug, they thaw out Spartan.

The rest of the film is an action based Fish Out of Temporal Water where Phoenix has already committed a MurderDeathKill. Hilarity Ensues, and a fight all over San Angeles that, as it should, results in an insurance nightmare. Spartan wouldn't have it any other way.

Not to be confused with the Demoman, or Alfred Bester's The Demolished Man.

Tropes used in Demolition Man include:

I've seen the future. You know what it is? It's a 47-year-old virgin, sitting around in his beige pajamas, drinking a banana-broccoli shake, singing, "I'm an Oscar Meyer wiener."

Retrieved from "https://allthetropes.org/w/index.php?title=Demolition_Man&oldid=1958358"
Categories:
Cookies help us deliver our services. By using our services, you agree to our use of cookies.