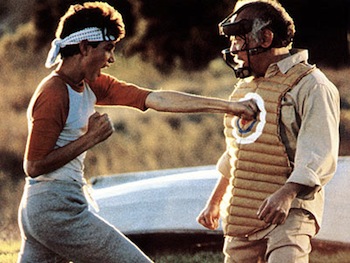 This makes so much more sense compared to waxing cars.

A series of five films beginning in 1984. Following a similar pattern to the first Rocky movie (and featuring the same director) it focused on a student-master relationship between Daniel Larusso and Mr. Miyagi, whose name came to be slang for a type of Retired Badass. The first three films starred Ralph Macchio as Daniel and Pat Morita as Miyagi. Hilary Swank played a new "Karate Kid" in the fourth movie.

The Karate Kid: (1984) The first film introduced Daniel Larusso, a teenager whose father had passed away (although the viewers wouldn't learn this until the second movie) and he just moved with his Mom from New Jersey to Reseda, California. Daniel has a little bit of a temper, but is overall a good kid. He doesn't fare well making new friends, upon trying to get close to a girl he likes, Ali, he gets into a fight with her ex-boyfriend Johnny. Johnny happens to be the prize student of the Cobra-Kai Karate Dojo, whose sensei John Kreese encourages such behavior. After they fight, which ends with Daniel losing badly, Johnny leads his gang into tormenting Daniel whenever possible.

It finally leads into a serious fight with the gang chasing Daniel down and beating him up just outside his apartment complex. Coming to his rescue is the elderly Asian handyman, Mr. Miyagi. Despite his age, Miyagi protects Daniel and defeats the Cobra-Kai gang with ease. Upon seeing Miyagi's skill, Daniel requests to be trained. After seeing that appealing to Kreese won't work, Miyagi agrees to train him but arranges a deal that the Cobra-Kai will stop bothering Daniel if he enters an upcoming tournament.

Daniel is hesitant about the tournament, but willing to learn karate at the least to defend himself. The first few days Miyagi had Daniel do several chores: paint the fence, sand the decks and wax the car. Daniel endures it patiently, but eventually blows up at Miyagi for using him as a slave instead as a student. Miyagi then demonstrates what Wax On, Wax Off really means. Daniel is stunned, then begins to understand that Miyagi wasn't trying to teach him how to fight, but how to apply martial arts to his life.[1]

The first movie is the most loved of the film series, and Pat Morita earned an Oscar nomination for his portrayal of Mr. Miyagi. The Nostalgia Filter helps a lot, as the film is not ashamed to be set in the 80's. Though given that it was also filmed in the 80s, this probably explains why. The main theme of this film is balance and self-respect, that martial arts should be used in discipline and not for aggression.

The Karate Kid, Part Two: (1986) Six months after the first film, Daniel has broken up with Ali and is being set up to move in with Mr. Miyagi as his mom moves up north. Miyagi receives a notice that his father is gravelly ill and he decides to return to his home village in Okinawa. Daniel wants to support his friend and father-figure and goes with him, also hoping to learn more about Miyagi's history.

At the village many things have changed, and Daniel learns of an old feud between Miyagi and his old friend Sato that has not passed with time. (Miyagi left Okinawa so he would not have to fight to the death) Daniel also begins a troublesome relationship with Sato's nephew Chozen, who is even more aggressive. Miyagi's father dies but that did not subside Sato's anger. Along the way, Daniel also begins a new romance with a local girl, Kumiko.

The second movie was a well respected sequel, much of it having to do with the change of scenery and culture. A major theme of this film is about mercy and pacifism. Daniel learns about what 'life or death' combat is about and also trades blows with Chozen progressively throughout the film.

The Karate Kid, Part Three: (1989) One year since the first film, John Kreese is running into financial trouble after his humiliation in the first film and the beginning of the second. He orchestrates a plan with an old war buddy of his to bring the Cobra-Kai Dojo back by targeting both Daniel and Mr. Miyagi. They blackmail Daniel into returning to the same tournament so he could be humiliated by a new unstoppable student.

The third film was felt by many to be a severe case of Sequelitis, as the themes of fighting for self-respect and for your life in the previous films were dropped for a more standard underdog story and villain's plot. Also, Daniel doesn't seem to get any better, even after his "fight to the death" from the previous movie; he is just as inexperienced as in the first film.

The Next Karate Kid: (1994) Five years after the last movie, Mr. Miyagi and Daniel have parted ways and the venerable old man found a new student to help, Julie Pierce. She is struggling with a para-military group that almost runs her high school, with the leader Dugan (played by Michael Ironside) just as ruthless as Kreese from the earlier films. This time he takes her to a local monastery to learn about peace of mind.

This film was poorly received and made even less than the last film, which essentially killed the franchise.[2]

The Karate Kid: A Continuity Reboot set in Beijing, China was released in June 2010, starring Jaden Smith and Jackie Chan. It has kung fu instead of karate.

Cobra Kai: A Youtube Red original TV series set 34 years after the original movie that focuses on Johnny Lawrence reopening the Cobra Kai Dojo and mentoring a new generation of students. Stars the original actors for Daniel and Johnny.

The Karate Kid is the Trope Namer for:
The original film series has examples of:

"How come they're all blond?"

Daniel: (upon being instructed on Wax On, Wax Off) Where did all these cars come from?
Miyagi: Detroit.

Daniel: I thought you said you've been in plenty of fights?
Miyagi: Hai, for life, not for points.