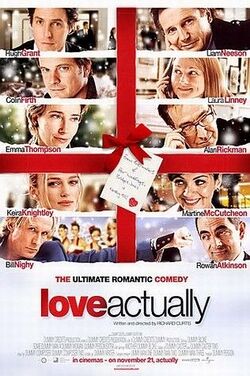 Love and Christmas are all around.

"General opinion's starting to make out that we live in a world of hatred and greed, but I don't see that. It seems to me that love is everywhere. Often, it's not particularly dignified or newsworthy, but it's always there - fathers and sons, mothers and daughters, husbands and wives, boyfriends, girlfriends, old friends. When the planes hit the Twin Towers, as far as I know, none of the phone calls from the people on board were messages of hate or revenge - they were all messages of love. If you look for it, I've got a sneaking suspicion... love actually is all around."
—The Prime Minister

Love Actually is a 2003 Romantic Comedy set during Christmas time.

The movie revolves around several different people and their relationships, all woven together. Among the myriad plotlines, we see the Prime Minister of the United Kingdom (Hugh Grant) falling hard for the girl who does the tea in Number 10 Downing Street (Martine McCutcheon), who also draws the eye of the visiting U.S President (Billy Bob Thornton); his sister (Emma Thompson) going through a rough patch in her marriage while her husband (Alan Rickman) finds himself drawn to his secretary; his work colleague (Laura Linney) finding herself torn between pursuing love with a long-time crush and her obligations to her disabled brother; a mystery writer (Colin Firth) decamping to France after his brother sleeps with his girlfriend and falling in love with the Portuguese maid, despite neither of them speaking each others' languages; an aging and burnt-out old rocker (Bill Nighy) making a last stab at music success, and his friendship with his manager / roadie; and a recently widowed father (Liam Neeson) trying to help his young stepson through his first case of heartache...

Tropes used in Love Actually include:

Natalie: Hello, David. I mean, sir. Shit, I can't believe I've just said that. And now I've gone and said shit. Twice. I'm so sorry, sir!
David: It's fine, it's fine! You could have said fuck, and then we'd both have been in real trouble.
Natalie: Thank you, sir. I did have a terrible premonition I was going to fuck up on my first day. ... Oh, piss it.

Bernie: Sorry, Mum.
Karen: I'm sorry too, Bernie. Sorry and ashamed and embarrassed... that I have put you in a school with such total and utter pricks that they don't get a good gag when they see one! I mean, this is high-class comedy. This is first-rate stuff! Look, you're my son and obviously I have to love you. But right now, I really love you! (Mother and son dissolve into laughter)

Billy: Oh come on, Mikey, you know as well as I do the record's crap. But wouldn't it be great if Number One this Christmas wasn't some smug teenager, but an old ex-heroin addict searching for a comeback at any price? All those young popsters, come Christmas Day... they'll be stretched out naked with a cute bird balancing on their balls, and I'll be stuck in some dingy flat with me manager, Joe, ugliest man in the world, fucking miserable because our fucking gamble didn't pay off. So if you believe in Father Christmas, children, like your Uncle Billy does, buy my festering turd of a record. And particularly enjoy the incredible crassness of the moment when we try to squeeze an extra syllable into the fourth line.
Mikey: I think you're referring to 'If you really love Christmas... '
Billy: 'Come on and let it snow'? Ouch.

Sam: You know the films, they never get together until right at the very end.

Sam: "Let's go get the shit kicked out of us by love."