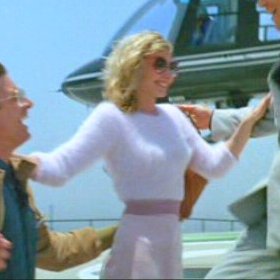 Just in case her skintight suit in the movie wasn't hot enough...

Tight sweaters tend to wrap quite well around a lady's figure. Yet they just outline the figure (there's a reason shapely breasts are called "sweater puppies") while barely actually showing anything. That makes wearing a tight sweater some of the most tasteful Fetish Fuel around (not to mention one of the few actually acknowledged in mainstream fiction).

Not that this can never be tacky. It's just if ladies want to look sexy, and the choice is between a halter top or an angora sweater, the latter is far less likely to have the wearer say, "Just because I'm wearing these clothes doesn't make me a prostitute!" It's more the "I'm way out of your league," kind of sexy. (Particularly fuzzy sweaters emphasize this by subtly echoing glamorous fur.)

In the days of the Hays Code, once those sweaters caught on, they were almost up there with the heart-shaped neckline as a way of Getting Crap Past the Radar. Actresses who embraced this look were known as sweater girls. There was even a precursor to padded/underwire brassieres known as the "bullet bra" which had distinctly conical cups, designed to make sure your sweater could (ahem) get its point across.

Examples of Sweater Girl include: