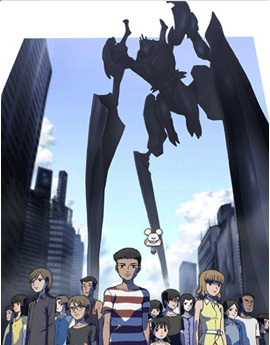 Bokurano (meaning Ours) is an 11-volume manga written by Mohiro Kitoh, the creator of the infamous Mons Deconstruction Narutaru (aka Shadow Star), and is essentially about a group of middle-school children who are contracted into a "game" where they pilot a Humongous Mecha in order to save their world from destruction. The anime adaptation began airing in the spring season of 2007 and ran for 24 episodes. There is also a five-volume light novel series called Bokurano: Alternative, which, as its title suggests, is an Alternate Universe take on the manga's storyline that places the characters in somewhat different circumstances.

Viz Media is currently releasing an English translation of the manga as Bokurano: Ours on its IKKI website, with the first English-language volume having been released in February 2010.

Some describe it as "like Evangelion, but even more depressing." Others would say that doesn't go far enough and that this makes Evangelion look like the Care Bears.

Be warned: there is a faked 'translation' of the novels (actually based off someone's fanfic) circulating the Internet. As a result, exercise extreme caution when adding novel-specific tropes. See the discussion page for details.

Tropes used in Bokurano include:

Warning: Watching Bokurano may cause depression. Proceed with caution.

Retrieved from "https://allthetropes.org/w/index.php?title=Bokurano&oldid=1666901"
Categories:
Cookies help us deliver our services. By using our services, you agree to our use of cookies.