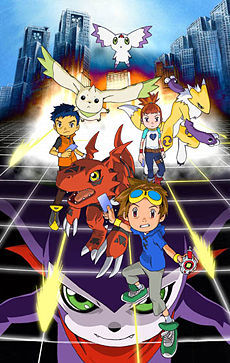 Awaken the Tamer in you.

The third anime series of the Digimon franchise, Digimon Tamers was the first installment to set itself in a different canon entirely, setting the standard procedure for the rest of the franchise to come. Gone were the characters and world of Digimon Adventure, instead introducing a new cast, new mechanics for pretty much everything, and a very different interpretation of the Digital World. Its universe was intended to be much more grounded in reality than its predecessors, partly achieving this by using a version of the Digimon franchise as a Show Within a Show[1] of which the main cast are fans, and by giving the Hyper Colosseum card game an important role in mon-to-mon combat.

The series' hallmark is being Darker and Edgier than its predecessors (and indeed, every other Digimon canon since (with one possible exception), and is significantly more cerebral, psychological, technologically minded, and becomes one hell of a Cosmic Horror Story by the end. It tends to be described as "Neon Genesis Evangelion with Mons," or "Serial Experiments Lain for kids", and for good reason - series head writer Chiaki Konaka was also the man behind Lain and is reportedly a big fan of Evangelion.

Much as you'd imagine as a result of its alternate canon, Tamers was the first of many causes of dissent among many fans; though Tamers is certainly one of the most popular Digimon series among the fanbase, it certainly has its detractors who consider the Adventure canon to be the superior works. Even so, it still stands alongside its predecessors as one of the most popular installments in the franchise - if one were to ask on a Digimon board about peoples' favourite Digimon series, the bulk of answers are almost guaranteed to be either Tamers or Adventure.

Its predecessor was Digimon Adventure 02, and it was succeeded by Digimon Frontier, which continued the trend of rebooting into a new universe and presented a radical shift in concept.

Digimon Tamers is officially available in its original Japanese with English subtitles (of dubious quality) on Hulu, Crunchyroll and the PlayStation Store, but only in the US and Canada.

Tropes used in Digimon Tamers include:
Retrieved from "https://allthetropes.org/w/index.php?title=Digimon_Tamers&oldid=1861077"
Categories:
Cookies help us deliver our services. By using our services, you agree to our use of cookies.