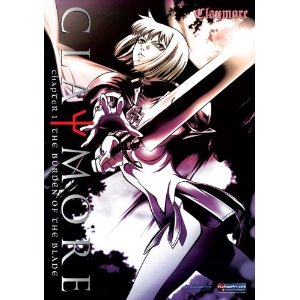 In a World plagued by demons, a shadowy organization creates an order of half-human, half-demon warriors to hunt and kill the demons. Cast out by society and cursed wherever they go, the half-demon women known as "Claymores" — after the gigantic Scottish-like swords they carry — lead doomed, violent, and short lives of high adventure. But only they can detect and hunt the demons, who can disguise themselves perfectly as humans.

In this world, a teenage boy named Raki is cast out by his village after his family is wiped out by the demons. He is adopted by the warrior Clare, who slew the demon who killed his family, and tags along with her as her cook from village to village, as she plunges into desperate fight after desperate fight.

Tropes used in Claymore include:
Retrieved from "https://allthetropes.org/w/index.php?title=Claymore&oldid=1899532"
Categories:
Cookies help us deliver our services. By using our services, you agree to our use of cookies.