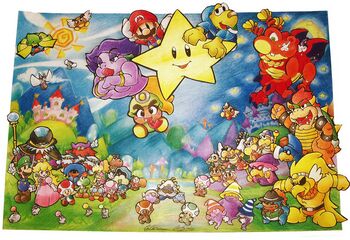 This game is the Game Cube sequel to the original Paper Mario and the second game in the Paper Mario series. It starts like a lot of Mario games, with a letter from Princess Peach. She wants Mario to meet her at a distant town called Rogueport, to help her search for a legendary treasure indicated by the map she sent along with the letter. By the time Mario actually pulls into port, Peach is gone, and for once it's not Bowser who kidnapped her. (And he's very, very upset about that.)

The mysterious X-Nauts and their leader, Sir Grodus, are the ones responsible this time. They're after the same treasure as Mario, and are hanging onto Peach for an unknown purpose. As the game goes on, the nature of the treasure and why the X-Nauts are holding Peach comes to light, and let's just say said treasure is not a pile of gold coins.

This game has a Character Sheet.

Tropes used in Paper Mario: The Thousand-Year Door include:
Retrieved from "https://allthetropes.org/w/index.php?title=Paper_Mario:_The_Thousand-Year_Door&oldid=1857762"
Categories:
Cookies help us deliver our services. By using our services, you agree to our use of cookies.