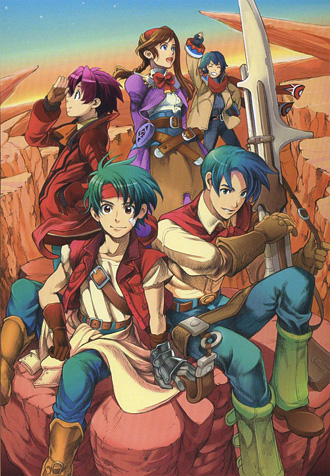 A cult RPG series by Media Vision and published by XSEED Games, Wild ARMs combines classic RPG gameplay with a wild west/SteamPunk setting and influence. Take the best parts of Final Fantasy and The Legend of Zelda and toss in some The Good, the Bad and the Ugly for good measure and you've got most installments of Wild ARMs. The series currently has seven installments. The ARM in the title refers to the guns used by various characters. The reason it is capitalized is because it is an acronym that means something different in each game.

The current[when?] games in the series are:

The games often deal with themes of self-discovery and growing up. Other important themes involve rebuilding the world, since each game takes place on the barren wasteland known as Filgaia. While a traditional RPG in the sense of battling, Wild ARMS also introduces tool-based exploration and puzzle-solving, giving it some minor action RPG elements.

In addition to the game series, there has been a manga adaptation for each installment, as well as an original manga know as Wild ARMs: Hananushubito / Wild ARMs: Flower Thieves. The series has also had its own anime, which is called Wild ARMs: Twilight Venom.

While the franchise hasn't enjoyed the massive success of Square-Enix's RPGs, it has managed to build up a loyal fanbase, especially in Japan where the first five games have all managed to become part of the "Playstation The Best", which is similar to the Greatest Hits and Platinum Range labels.

The following tropes are common to many or all entries in the Wild ARMs franchise.
For tropes specific to individual installments, visit their respective work pages.
Retrieved from "https://allthetropes.org/w/index.php?title=Wild_ARMs&oldid=1942295"
Categories:
Cookies help us deliver our services. By using our services, you agree to our use of cookies.