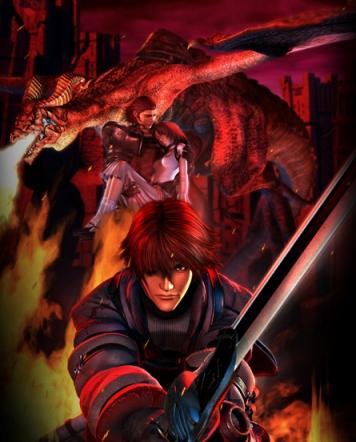 Drakengard is a videogame, published by Square Enix and made by Cavia in 2003, noticeable for its combination of a multilayered, surreal plot and excellent atmosphere with rather weak, repetitive gameplay. The gameplay switches between Hack and Slash and Flight Sim, so one could think of it as a mixture of Dynasty Warriors and a sandbox version of Panzer Dragoon. It takes place in a Heroic/LowFantasy medieval setting, and it follows Anti-Hero Caim on a mission to destroy an evil empire (aptly named "the Empire") while also protecting his sister Furiae. Furiae is called "the Goddess" because she is part of four seals that protect the world from an unknown danger: she is a living seal, and her death would herald chaos in the world. Caim is joined initially on his quest by Inuart, his best friend and Furiae's betrothed before she became the Goddess, and four other characters, the circumstances of each being varied and always tragic.

One of the major concepts in Drakengard is that of a pact, or of two beings of different races binding their souls into one. Caim is mortally wounded in the first stage as he runs towards Furiae's castle in the midst of a battle, and discovers a chained and wounded dragon in the courtyard. He proposes that in order to save them both, the two should form a pact. In forging the pact, Caim can control the dragon during flight and has access to the dragon's vast strength, but he gives up his voice (he's capable of speaking telepathically with the dragon). However, if either Caim or the dragon dies, they both die, and it seems the pain one feels is transferred to the other as well. All of the other members of Caim's party have a pact, and a certain price they have paid for it:

The game starts off simply enough, with Caim and any party members he's managed to find running from one location to the next, trying to prevent the Empire from destroying one of the three land-based seals. Each seal that is destroyed makes the burden on the Goddess that much more unbearable. As Caim journeys on, he learns about the Cult of the Watchers which has taken hold over the Empire and their evil machinations for the Goddess. The game gets progressively weird and surreal as events go on, and the interactions between characters gradually become more nuanced and complex from the straight-up swords and sorcery formula. By its end, Drakengard has gone beyond the standard unspoken agreement between author and audience and thrown us into the stuff of nightmares. Watching how the characters react with this and observing their hopeless and doomed plight is strangely interesting; morbid curiosity drives one to finish the game's five endings. Much like a certain famous anime, Drakengard does not shy away from the surreal, the macabre and the downright depressing.

One of the most striking things about the game is how so many Video Game Tropes are turned completely on their head. Your main cast is less than virtuous. Caim is a mute bloodthirsty nutcase, Inuart goes completely nuts and evil, Furiae isn't entirely innocent, and the list just goes on and on. Foiling the Big Bad just makes things worse, as does winning the war against the Empire. One of the main themes of the game is nihilism, since the all-powerful and also insane gods have decreed that the world is going to end, and damn if they're going to let you do anything about it. Really, there's few games like it out there.

The sequel takes place eighteen years after the original game, and features a new lead character: Nowe, a Knight of the Seal. He was raised by a dragon named Legna for a good deal of his life until he was taken under the wing of General Oror and taught the ways of man. However, Nowe and Legna are not pact-partners, but Nowe has learned to speak the language of dragons, hence his nickname "Dragon Boy". Other playable characters include Eris (another Knight of the Seal), Urick (a defector from the knights and acquaintance of Nowe and General Oror), and lastly, a familiar red-eyed, blonde-haired woman.

There is a third game in the series, Drakengard 3, which happens to be a Prequel of sorts. Its plot revolves around a woman named Zero, who is bent to defeat and kill the Intoners, the five most powerful magical person in the world.

Also has an Alternate Continuity sequel in the 2010 game NieR, which takes place in the distant future after Ending 5 of the first game. that game also has its own sequel, NieR: Automata.

Tropes used in Drakengard include:
Retrieved from "https://allthetropes.org/w/index.php?title=Drakengard&oldid=1904960"
Categories:
Cookies help us deliver our services. By using our services, you agree to our use of cookies.