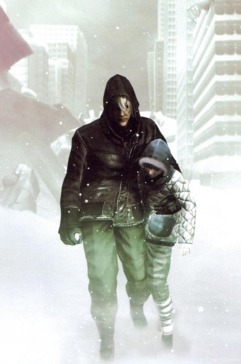 NieR is an action/role-playing game developed by Cavia and published by Square Enix, released in April 2010 world-wide for the Play Station 3 and Xbox 360.

Set in a dying world, over 1000 years after a great calamity nearly wiped out the human race, those remaining live on as best they can, robbed of resources and technology. Yet the already dwindling population is again under threat from the Black Scrawl, a terminal disease that seems to be connected with the dangerous creatures known as Shades. One of those affected by the Black Scrawl is a little girl named Yonah. This is where it gets a bit complicated...

There are two versions of the game: Gestalt and Replicant, and each has a slightly different protagonist. Both are named Nier, but the former is a burly middle-aged man who is Yonah's father, whereas the latter is a slender adolescent who is Yonah's elder brother. Though everything else remains the same, the age gap between the two Niers produces a different context for the story, with the world-weary Father Nier contrasting sharply with his younger, foolishly-optimistic counterpart. However, Replicant is Japan exclusive.

Nier survives by hunting Shades and relying on the charity of his village, but he is powerless to help his precious Yonah. However, after a chance encounter with a talking spellbook named Grimoire Weiss, Nier discovers that there may be hope for a cure after all and immediately sets out on a quest to find it, using his newfound Black Magic to cut down anything in his way. During his travels, he is also joined by a scantily-clad foul-mouthed swordswoman named Kainé, and Emil, a young boy with terrible powers.

Gameplay is a combination of traditional Hack and Slash combined with various other RPG elements thrown in. The story is closely related to Drakengard, following directly from its final ending. As with its predecessor, this game gets very depressing at points.

Oh, and play it more than once. It has secrets that are revealed after the first playthrough. Many secrets.

A DLC package called The World of Recycled Vessel was released May 2010 that included various bonuses. The plot revolves around the death of Nier's wife/mother and the cryptic diary entries she left behind.

In E3 2015, however, Square Enix made a surprising announcement with the reveal of a sequel NieR: Automata, that's set for a 2016 release. Although developed by Platinum Games, the original's creator Taro Yoko, producer Yosuke Saito and composer Keiichi Okabe have also returned to their respective roles. While the game itself takes place in the year 11941, thousands of years after the events of NieR.

Tropes used in NieR include:

Retrieved from "https://allthetropes.org/w/index.php?title=NieR&oldid=1700697"
Categories:
Cookies help us deliver our services. By using our services, you agree to our use of cookies.