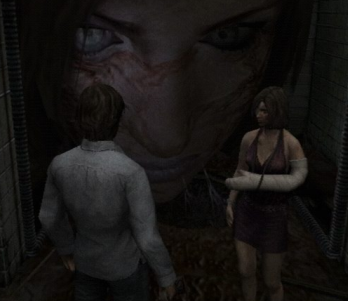 Silent Hill 4: The Room (no relation to The Room) is the fourth game in Konami's Silent Hill franchise (and the first to be given a subtitle). A popular rumor states it was originally conceived as a wholly original Survival Horror game, but was converted into a Silent Hill game during development. It's true origin was that the game was meant to be a spinoff/separate Gaiden Game from Team Silent called Room 302, which was decided against, but elements of it were incorporated into SH4, explaining why it has several differences in gameplay to previous Silent Hill games: it has an on-screen health bar, limited inventory space, and a number of first-person sections.

The main character is Henry Townshend, the resident of Room 302 in the South Ashfield Heights apartment complex. One day he wakes up and discovers that he has become trapped in his own apartment: he can't open any of the windows, his telephone is cut off, no-one outside of the apartment can hear his cries for help, and his door has been sealed off from inside by multiple chains and locks.

After five days of incarceration, a hole appears in Henry's bathroom wall. With no other choice, Henry crawls inside and finds himself teleported to various locations around the town of Silent Hill. These locations have been infected by an evil power, one that forces Henry to defend himself from a number of monsters and ghosts that pursue him.

Furthermore, that same evil power appears to be stalking what few living humans Henry manages to meet in this strange otherworld, and killing them in a ritualistic fashion. What purpose do these killings have, and will Harry be able to escape Room 302?

The real horror of SH4 comes via Room 302, Henry's apartment. Room 302 initially serves as your only safe haven -- Henry can heal injuries and store items found during his excursions into Silent Hill -- but as his journey into madness continues, his apartment begins to become overtaken by the evil power haunting him in Silent Hill. The titular room eventually evolves into something sentient and demonic that will actively hurt Henry unless he can exorcise the forces invading his apartment and defend his last bastion of safety and sanity.

SH4 is loosely tied to previous Silent Hill games; names and locations that got a brief mention in memos found during past games are fully fleshed out in this game, and South Ashfield Heights' superintendent is the father of James Sunderland (from Silent Hill 2).

Tropes used in Silent Hill 4 include:
Retrieved from "https://allthetropes.org/w/index.php?title=Silent_Hill_4&oldid=1881842"
Categories:
Cookies help us deliver our services. By using our services, you agree to our use of cookies.