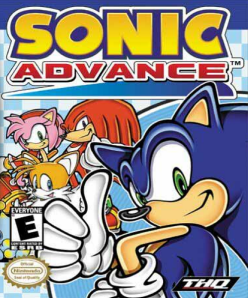 The Sonic Advance trilogy is a trio of games in the Sonic the Hedgehog series for the Nintendo Game Boy Advance.

Co-published by Sega and Dimps and designed in the vein of the classic Mega Drive/Genesis side-scrolling platformers, this trilogy is essentially lip-service for older fans, with some elements of Sonic Adventure thrown in.

The first game, Sonic Advance (2001), is perhaps the most reminiscent of the older games. The plot is very minimal (thwart Dr. Eggman!) and the gameplay is a bit slower than its successors but features a little more emphasis on platforming. This was the first 2D side-scroller in the series to feature Amy Rose as a playable character. It was also the first ever original Sonic/Sega game (Not counting Sonic Adventure 2: Battle as it was a port) to appear on a Nintendo system after Sega's switch to software manufacturing. Was ported to the short lived Nokia N-Gage as Sonic N, but suffered from being transposed from the horizontal screen of the GBA to the vertical screen of the N-Gage (it also removed the Tiny Chao Garden).

In Sonic Advance 2 (2002), Cream the Rabbit and her chao companion Cheese join Sonic and friends in the battle against Eggman after he abducts her mother and Tails. The gameplay is definitely the most extreme in the trilogy; the focus on speed is greater (to the point of making all but one boss a running battle), all of the characters now have the ability to grind on rails, and they can perform tricks with a press of the R-trigger after going off a ramp/spring to gain more momentum.

The first two games both feature a special condensed Chao Garden (although for some inexplicable reason the developers made it so you had to unlock it in the second), and the Game Cube-GBA link cable can be used to import/export chao from and to the Gamecube ports of Sonic Adventure and Sonic Adventure 2.

In Sonic Advance 3 (2004), Eggman literally splits Earth into seven zones through the power of the Master Emerald, and uses a familiar robot that can emulate our heroes' abilities to try and take over the shattered world. Sonic and friends must reunite with each other in order to bring the planet back together and stop Eggman. The gameplay focuses on teamwork (kind of like Sonic Heroes or Knuckles Chaotix) by having you select a player character and a partner character out of five characters (Sonic, Tails, Amy, Knuckles, Cream); the different combinations have different abilities. The stage design is like a fusion of its predecessors, combining the platforming action of the first game and the high-speed hijinks of the second. This game was especially notable for its All There in the Manual story. The black robot Gmel is actually the robo-reincarnation of Sonic Battle's robot Emerl.

Although the Unpleasable Fanbase often reared its ugly head, the trilogy as a whole was very well-received.

Followed by a spiritual successor of sorts in the Sonic Rush games for the Nintendo DS, which were also critical successes.