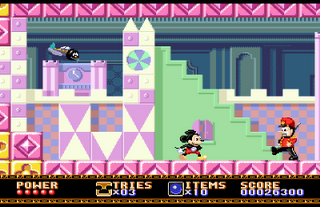 Everyone played with toys, right? They're bright, and happy, and remind you of happy children. Why not use that to your advantage when writing a video game?

Toy Time is an area in a Video Game that is themed around children's toys, set in a toy store/factory/closet/box/etc., or even completely made of toys. The toys may or may not be giant. Expect to see a lot of sugary cute enemies.

Toy Time tends to include primarily simple or old-fashioned toys for some reason. Expect to see lots of blocks (especially blocks moving back and forth across a bottomless pit), toy soldiers, balls, and so forth; this is the case in Super Mario Galaxy. Alternatively, Toy Time might just be bright and colorful with architecture that suggests childishness; this is the case with Paper Mario. There is a good chance that at least some of the level will be made of Lego, but don't expect the game to actually mention it.

Sometimes, the toys are the actual characters - Living Toys.

Toy Time is usually played as a lighthearted romp through childhood memories, but with just a change of the background music and some creepy enemies in the stage, it can get a much darker, dissonant tone. A Toy Time in a Sonic game would be far different from Toy Time in Silent Hill.

In the most whimsical cases, it's a Sub-Trope of Wackyland. See also Level Ate, the edible version.

Examples of Toy Time include:

Retrieved from "https://allthetropes.org/w/index.php?title=Toy_Time&oldid=1835090"
Categories:
Cookies help us deliver our services. By using our services, you agree to our use of cookies.