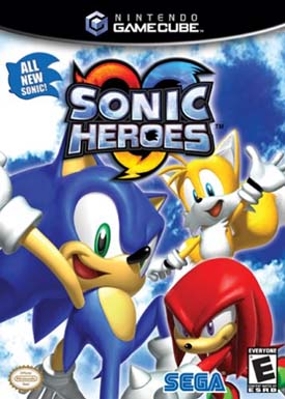 Sonic Heroes is a video game in the Sonic the Hedgehog series released at the end of 2003. It's notable for being the first Sonic game to have Multi Platform release on all three consoles after Sega quit making consoles (prior to this, Sonic stuck to the Gamecube with several rereleases of older games and the Game Boy Advance for the 2D Sonic Advance trilogy) as well as the first original 3D Sonic game after Sonic Adventure 2. Its primary gameplay gimmick is teamwork, and as such the story focuses on four teams of three: Team Sonic, Team Dark, Team Rose, and Team Chaotix. Each team has a Speed, Power, and Flight character with an associated formation. Each formation can be immediately switched with the press of a button.

Team Sonic consists of Sonic, Tails, and Knuckles. They get a letter from Dr. Eggman in which the evil doctor boasts that he has created the ultimate weapon to Take Over the World, and tells the trio that they have three days to stop him from launching it.

Team Dark consists of Shadow, Rouge, and E-123 Omega. All three are after Eggman, but for different reasons. Rouge wants Eggman's secret treasure, Shadow is currently amnesiac after being frozen in suspended animation and wants answers from Eggman, and Omega wants to kill the doctor for demoting him to secret base security.

Team Rose consists of Amy, Cream--with her Chao friend Cheese--and Mr. Big. Big must once again find his missing pal Froggy, Cream wants to reunite Cheese with his brother Chocola, and Amy, of course, wants to track down Sonic.

Team Chaotix consists of Espio, Charmy, and Vector. They are a group of detectives who are tasked with various missions from an unknown client that communicates with them via walkie-talkie. Vector and Charmy are eager to fulfill their client's tasks as they are promised a hefty cash reward; although skeptical, Espio is forced to join his comrades.

The game's reviews were rather mixed, but mostly positive, with the Game Cube version getting the highest overall scores, and the PlayStation 2 version getting the lowest. Fans and critics alike praised all of the callbacks to previous games and the return of Special Stages, but criticised the requirement of team-ups, the light-hearted storyline (which is rather ironic as later games would be called out for their complicated plots), and retaining some of the 3D problems of Sonic Adventure.

Was later followed up by a semi-sequel called Shadow the Hedgehog that wrapped up several of the loose threads in Team Dark's storyline.

A teamwork gimmick would also be used in Sonic Advance 3, but with a team of two instead of three and the ability to choose different character combinations.

Tropes used in Sonic Heroes include:
Retrieved from "https://allthetropes.org/w/index.php?title=Sonic_Heroes&oldid=1929808"
Categories:
Cookies help us deliver our services. By using our services, you agree to our use of cookies.