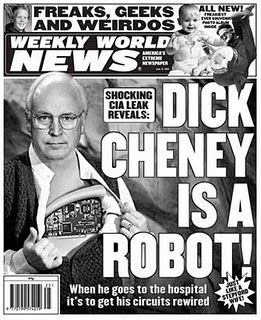 Then they get wounded, and instead of bleeding, they're releasing sparks. Or maybe you catch them doing something no human should, like changing stations by blinking, or lifting a car.

Apparently, the human you've been with was one of them cyborgs, Ridiculously-Human Robots, or Mechanical Lifeforms.

At this point, one of two things may happen.

If the character is an enemy, this is the signal for The Hero to go all out in battle. After all, it's a robot, who cares if it gets killed?

However, if the character is a friend, this will lead to much shock and/or angst for everyone as they ask themselves What Measure Is a Non-Human? This may include a Heroic BSOD if even the robot doesn't know.

A specific kind of Glamour Failure. For the alien and other organic creature version of this trope, see Alien Blood and Bizarre Alien Biology. Occasionally appears as a Subversion of Mortal Wound Reveal - the robot should have died, but because of its non-biological nature, it won't die, causing much in the way of Oh Crap moments.

Spoilers ahoy, so be wary.

Examples of Robotic Reveal include:

Retrieved from "https://allthetropes.org/w/index.php?title=Robotic_Reveal&oldid=1722558"
Categories:
Cookies help us deliver our services. By using our services, you agree to our use of cookies.