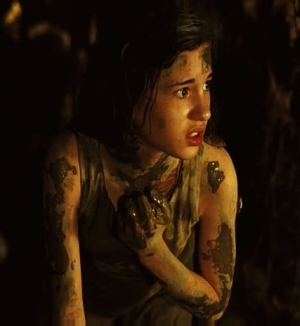 It was a rough night, but she'll be fine.

Women and girls are action and adventure heroes nowadays, just like men and boys are. They get into dangerous situations, face menacing villains, get captured, and even get into fights.

But even when they're portrayed as equally able to get into danger, something is a little different for the girls. While guys get their clothes messed up a lot or torn, girls tend not to (unless it's that kind of Clothing Damage). Guys show visible bruises and cuts from their fights, but girls don't suffer these things. Heck, girls don't even get their hair disheveled most times! It's as if nature itself Wouldn't Hit a Girl, not to mention there's often a Dirt Forcefield (perhaps affected by being Stripperific--chew on that one for a moment).

Likewise, girls are almost never used in slapstick comedy (but she can get a Pie in the Face). They never become The Chew Toy. This is less common with independent artwork actually created by women, who apparently don't have hang-ups about hitting a girl (for obvious reasons), but don't expect to see too many women suffering Amusing Injuries on TV or in much of anything published.

Possibly this is because girls are supposed to be beautiful, and the actual scars that an adventure would realistically bring tend to detract from their beauty. Fierce hand-to-hand fights are cool, even sexy, but the broken noses and black eyes they cause are not. Since Most Writers Are Male, they only want to see males getting hurt, whether humorously or through exciting action sequences.

This version of the trope may be less common nowadays, possibly because more people, of both genders, want a "cool" Action Girl who proves she can handle tough situations by showing the scars for having done so, and because mild scars don't necessarily detract from beauty in everyone's opinion. Plus, having one's hair disheveled, your clothes all scuffed up and your face drenched in 2 liters of sweat, blood and grime can be cute to some people, in a tomboy-ish way (or more than that...). Or there's a fire situation, which can Give a Whole New Meaning to "ash blonde".

Still a heroine will (almost) never suffer a permanent injury such as the loss of a limb or eye, no matter how much punishment she goes through. It's fairly rare for heroes too, but much, much, much rarer for heroines. In the case of heroes, they usually go from Beauty to Beast. Several variations of this include She Fu and Waif Fu.

The other version of this trope concerns a different form of beauty: inner beauty. Guys fart, burp, etc.; but girls aren't shown doing it anywhere near as often. Gross-out jokes tend to always involve guys, not girls. After all, girls are never gross, don't you know? And, since Most Writers Are Male, they tend not to want them to be gross.

Could be seen as a form of Positive Discrimination in some cases. After all, a female character suffering serious injury or even dying will attract accusations of misogyny, Chickification or Stuffed Into the Fridge...

This is more common in the West, particularly in older movies and shows, but the outer beauty version is much less common in Japan, where both genders can be equally roughed up or exposed to violence... on the other hand, the inner beauty version is, if anything, several times worse. Also, this is more common in visual media, where the women are expected to be cute or beautiful, than in books, where it doesn't really matter what the character "looks" like, since you can't see her. Finally, this may not protect an evil or annoying character from Gunge, and female villains may also acquire appropriate scarring. (However, giving a Femme Fatale a permanent scar is generally not a good idea.)

Male examples of this trope are rare, but more common in works targeted to a female or gay male audience where the male characters are hoped to remain attractive.

If a girl regularly averts this and it’s Played for Laughs she is probably a case of Slapstick Knows No Gender.

Compare Dirt Forcefield, Kicking Ass in All Her Finery. For the clothing only, see Bullet-Proof Fashion Plate. If beauty is tarnished and then subsequently killed off, it's Death by Disfigurement.

Examples of Beauty Is Never Tarnished include:

NO AVERSIONS, unless it's a really extreme case, not tragic and/or played for comedy.

At some point Stormburst (the Alex Mack of the DC Universe) apparently figured out how to do it, since it's commented on by a villain she fought in Cross Purposes 2.

Examples and exceptions of the second (gross-out oriented) kind

Retrieved from "https://allthetropes.org/w/index.php?title=Beauty_Is_Never_Tarnished&oldid=1955714"
Categories:
Cookies help us deliver our services. By using our services, you agree to our use of cookies.