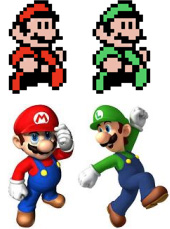 Named after the biological phenomenon known as Divergent Evolution, where two closely related species develop wildly different traits over time. Here it means an act of Character Development wherein a character who was extremely similar to another character is given his or her own identity.

This is extremely common in video games, where characters who were originally identical to the lead (usually to allow for two-player play, or just because the lead is popular) are often given their own special abilities and personality quirks in later games.

Examples of Divergent Character Evolution include:

Retrieved from "https://allthetropes.org/w/index.php?title=Divergent_Character_Evolution&oldid=1922654"
Categories:
Cookies help us deliver our services. By using our services, you agree to our use of cookies.