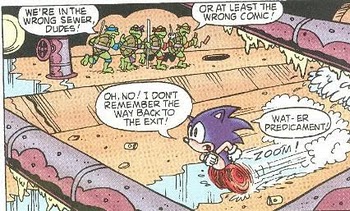 Somebody is very lost.

Sometimes fiction leans towards a rather lax interpretation of trademark issues. You may find characters who are not merely an imitation of a character from a popular show, film, or comic, but literally are that character. Somehow.

You can blur their face a bit or simply not name them. Still, this trope is known enough you can expect any work that featured these frequently will get modified a bit if the adaptation's sponsors are worried about pissing anyone off.

On the other hand, if said cameo character is famous enough, you're liable to get away with a more overt reference.

Often used as part of a Take That, but just as often a friendly Shout-Out. See also Writing Around Trademarks. Compare Captain Ersatz and No Celebrities Were Harmed.

Examples of Lawyer-Friendly Cameo include:

Retrieved from "https://allthetropes.org/w/index.php?title=Lawyer-Friendly_Cameo&oldid=1927339"
Categories:
Cookies help us deliver our services. By using our services, you agree to our use of cookies.