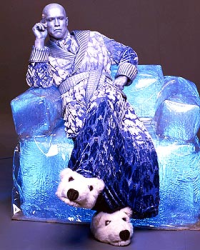 Tremble before my bathrobe of DOOM! Or else I'll kick some ice!

"Just whose idea was it to have this evil general running around wearing neon blue lipstick? It's hard to look like a militaristic badass when you look like you just escaped from a production of Cabaret! I kept wondering if his D&D alignment was Chaotic Fabulous!"

—Scott Foy on Dungeons and Dragons (The Movie)

The heroes have had it. They've been captured and tied up, and can only watch mutely and impotently as the Evil Overlord's final plans unfold. The large, oversized doors at the far end of his cavernous control room swing open, and in walks the Big Bad himself in an ominous swirl of purple fog...

Wait. Is that a cocktail dress he's wearing? Is that a bone in his nose? Hoop earrings in his ears? A pink satin turban? Clown makeup?

Did the Evil Overlord suddenly forget that he was in a serious action-adventure and decide to play dress-up with a trunkful of his mother's old castoffs?

Uh-oh. It seems we have a Fashion Victim Villain on our hands.

This trope comes into play whenever a villain decides to don an outrageous, over-the-top costume, usually replete with Dark Colors, Shoulders of Doom and Spikes of Villainy, thinking it will make him look like a fearless, all-powerful Badass. Instead, it makes him look pitiable and ridiculous, if not slightly unhinged.

It's not hard to see why this should happen. Villainy, as a profession, tends to attract flamboyant personality types. Still, this is no excuse for dressing up as a gothic drag queen during the least appropriate times, and no amount of inhuman strength, dog-kicking, or Magnificent Bastard-ness can restore a villain's menace once it's been undercut by a move like this, at least most of the time. (Unless the villain happens to be a Monster Clown, and the over-the-top costume and makeup is part of his/her schtick.)

A Fashion Victim Villain most often dresses in this manner during moments of triumph or when they're first meeting with the heroes (in a failed attempt to impress them). Sometimes they may dress like this unintentionally—a radiation suit, designed for the very utilitarian purpose of protecting the villain, may have ridiculously large hips or a phallic helmet, or be colored with loud shades. Either way, one can expect the audience watching the show to chortle a bit upon seeing the villain's new threads. The heroes themselves may mock the villain for his lack of taste, but just as often will let it pass without comment (especially if they have other, more pressing matters on their minds). The villain's allies and henchmen probably won't dare to even crack a smile around the villain (when he is around).

Of course, it was also stated in the Evil Overlord List #29, which stated "I will dress in bright and cheery colors, and so throw my enemies into confusion." Still, that's no excuse for not doing it well.

Tends to happen a lot with Sissy Villains and Agent Peacocks. May cross over with Highly-Conspicuous Uniform if the Mooks are victims, too.

Examples of Fashion Victim Villain include:

Galactus: I CARE NOT FOR THE OPINIONS OF LESSER MORTALS REGARDING MY HAT.

Dr. Evil: Mr. Powers, how do you like my quasi-futuristic attire? I designed it myself.

Riddler: Like the jacket? It keeps me safe when I'm jogging at night.

Matthew Patel: Pirates are in this year!

Joel: You can bet that anybody seriously interested in world domination is gonna end up looking like a real snickerdoodle.
Dr. Forrester (in a ridiculous outfit): What is that supposed to mean?! I’ll deal with you later! Back to the drill, Frank. You will bow down before me, Son of Jor-El! Bow down!

Michael Thorton: How many gay cheetahs gave their lives for this jacket?...

Wonderella: Holy crap! This bomb may have a few seconds left... but those assless chaps? Those are forever.

Wakko: Oh boy! The clown is here!
Dictator: This is the uniform of a great man!
Yakko: Does he know you're wearing it?

"Every professional nemesis has weaknesses. One, they wear goggles. Peripheral vision is shot! Two, helmets with logos and stuff on them? A guy with a big metal piece of punctuation on his hat can't turn his head fast!"