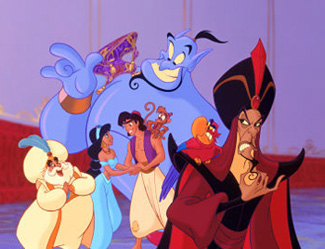 The one on the right.

A quintessential villain, who acts as an evil foil to the hero's personality and is a main block to his journey towards his destiny. Will always end up existing as an obstacle to, or as a consequence of, the hero's quest, and they generally have the following characteristics:

In a nutshell, a villain who is iconically evil and represents a certain sin deep down, who deceives the heroes to further his own ends, is essential to the heroes' Character Development, and is defeated iconically in a super-dramatic final battle, usually due to his own flaws.

This is extremely common in Disney Animated Canon, where it could be said that any given villain follows this formula, though the Trope Codifiers may be in the works of William Shakespeare, where, likewise, any given villain could fit this mold perfectly.

Examples of Classic Villain include:

Retrieved from "https://allthetropes.org/w/index.php?title=Classic_Villain&oldid=1501157"
Categories:
Cookies help us deliver our services. By using our services, you agree to our use of cookies.