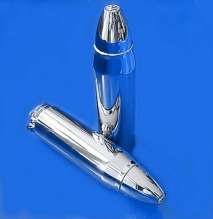 The silver bullet is a common form of Depleted Phlebotinum Shells. It's often called for when supernatural creatures are around for whom silver is an Achilles' Heel.

Throughout mythology and subsequent fiction, silver has been a common ward against evil. Silver, especially if blessed, was thought to ward off or harm certain supernatural beings (including vampires) since the Middle Ages. The use of silver bullets to kill werewolves has become popular only since it was invented by Curt Siodmak, the writer of the 1941 film The Wolf Man (though in the 1933 novel The Werewolf of Paris by Guy Endore, someone did use a silver bullet on Bertrand Caillet, though it did not slay him, only landing in the leg).

A Sub-Trope of Silver Has Mystic Powers.

Examples of Silver Bullet include:

Retrieved from "https://allthetropes.org/w/index.php?title=Silver_Bullet&oldid=1581745"
Categories:
Cookies help us deliver our services. By using our services, you agree to our use of cookies.