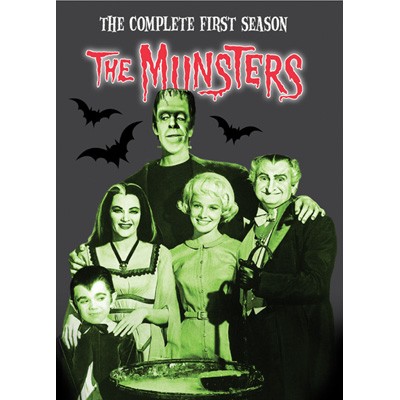 A Mundane Fantastic Dom Com that originally ran from 1964 to 1966 about a working class family of would-be monsters. Experienced surprising high ratings during the period before the Batman TV series came on, revolutionizing color TV.

The humor of the series came from the odd juxtaposition of many "cartoon" antics in a live action series, namely "Fast Motion", as well as the fact that despite their gothic appearance, the family doesn't seem to think they're different from anyone else, with the exception of cousin Marilyn who didn't inherit "The Family Look". Though sometimes compared to the Addams family, there are considerable differences. The Addams Family are in essence landed gentry (their history in the US goes back to the Pilgrim era), very refined and elegant, and independently wealthy; the Munsters are working-class recent immigrants (Grandpa having immigrated from Transylvania), and Herman has a quite coarse sense of humour. The Addamses are borderline supernatural in some undefined way; the Munsters are explicit monsters. The most important difference, however, is in the families' views of themselves and the people around them. The Addamses consider themselves perfectly normal, and cannot understand why the people they meet are so very strange; the Munsters believe themselves to be just like the people around them, and cannot understand why said people seem to think the family is so strange.

In summer 2017, a reboot series was announced, which would relocate the Musters from suburbia to Brooklyn, NY.

Tropes used in The Munsters include:
Retrieved from "https://allthetropes.org/w/index.php?title=The_Munsters&oldid=1543256"
Categories:
Cookies help us deliver our services. By using our services, you agree to our use of cookies.