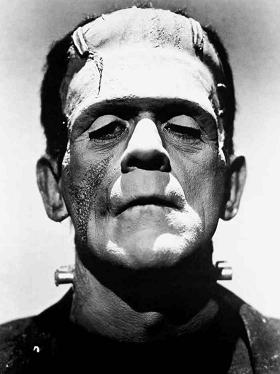 An iconic product of mad science, the creature has lumbered through scores of films and TV series, monstrous yet also pitiful.

In the original 1818 book by Mary Shelley, Victor Frankenstein creates the monster, then, repulsed by his creation, immediately throws it out. Later, it returns and demands that Victor make it a wife. He agrees, then reconsiders and destroys the half-completed bride. The monster retaliates by killing Victor's best friend and threatening to kill his wife, should he ever marry. Victor immediately marries his adoptive sister, who is also his cousin, Elizabeth, who is promptly killed. Victor then chases the monster into the Arctic, where the weather kills him. The monster then goes off and kills himself (or at least he says that's what he's going to do).

Few of this book's tropes were original—most were commonplace in Gothic novels of the eighteenth century—but they provide the oldest examples that are still widely read today. In it, the monster is created a blank slate, but is driven to evil by the way society mistreats it.

The book was first filmed in 1910, but the 1931 Universal Pictures production was the most influential version. This film added several now familiar tropes to the story, including:

In the early films, the monster is evil because a criminal or damaged brain was used. Modern films and TV series often revert to the original idea, depicting the monster as an innocent trapped in a monstrous body, unaware of the damage he can do, rejected by a cruel world. When it starts out as an Evil Minions, it often does a Heel Face Turn.

Don't use "Frankenstein" to refer to the monster. His name is Adam, at least according to readings given by Shelley during her lifetime. In the text of the book itself, though, he is generally referred to as "the creature".

Part of the classic Monster Mash with Dracula, Mummy, and the Wolf Man. Compare also with the Golem.

Examples of Frankenstein's Monster include:

]
Retrieved from "https://allthetropes.org/w/index.php?title=Frankenstein%27s_Monster&oldid=1946654"
Categories:
Cookies help us deliver our services. By using our services, you agree to our use of cookies.