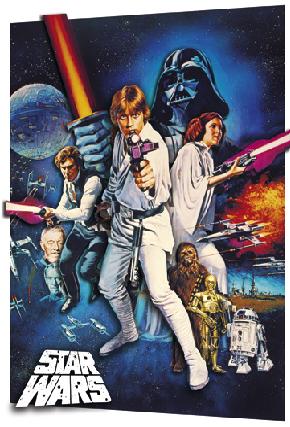 "Hey, it's not our fault if all the important humans in the galaxy just happen to be white."

"Why am I the only black Jedi on the Jedi Council? Ain't nobody else in here black, and if y'all black you got a bone in the middle of yo head."
—Mace Windu, Star Wars: A Lost Hope

Space has a lot of people in it. Way, way more people than science tells us there should be. There are blue people, green people, orange people, purple people, people that eat people, Proud Warrior Race Guys, Scary Dogmatic Aliens, Big Creepy-Crawlies, Energy Beings, and even the odd Sufficiently Advanced Alien with a very familiar name. And most of them even speak English.

But there's still probably just the one black guy.[1]

This trope can also appear in alternate dimensions or histories as well as in futuristic space stories.

In older live-action works, this occurs because the great majority of actors were white, and the Hays Code prohibited mixed-race romantic pairings of characters and the actors who played them.

Note that Humans Are White doesn't have to be about white people exclusively. If a Bollywood movie set in a distant, alien-filled galaxy features an all-Indian cast with other races in minor roles, and there is no in-universe explanation for the imbalance, then it's an example of this trope.

Contrast with Politically-Correct History. Also contrast with In the Future, Humans Will Be One Race, in which no race can be suspiciously over-represented because there is only one race to begin with.

Please do not confuse it with its Sister Trope, Monochrome Casting. Compare with how whites are blonde.

Examples of Humans Are White include:

"I always wanted to have a character who was African-American, and years later, when they did that, they did it in the worst way possible....instead of just incidentally having a character who happens to be black...they made a big fuss about it. He's a racial separatist....I just found it pathetic and appalling."
—Jim Shooter

"How come they're ain't no Puerto Ricans on Star Trek!? They got every race and life-form in the galaxy, except for Puerto Ricans! What's up with that?!

Leia: The Lando System?
Han: Lando's not a system, he's a black guy. Perhaps the only black guy in the universe.