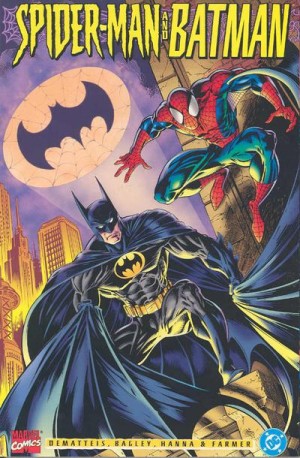 Doing whatever spiders and bats can.

I'd be far more embarrassed to dress up like, say, an animal. Now that would be silly. Face it. The hundreds of would-be badass capes who practice species crossdressing as various theoretically intimidating animals? That's one step removed from being a furry. Talk about embarrassing.

Animals are cool! They're scary, they have big teeth, they're fast, and they're stronger than us humans. It's no wonder that the cunning and beastly features of animals have served as inspiration for superheroes and villains for decades.

While Animal Superheroes are animals as superheroes, these characters are human, or at least humanoid. Their names can sometime invoke Something Person, but it's not always the case. These characters can also overlap with Beast Man if the hero or villain resembles their namesake. There are generally four types of this character.

Animal Abilities: Does whatever an animal can! These characters have powers, names, and personal appearances all based on one particular animal. This is the most common version.

Animal Alias: Does...something else. Usually, these characters are Badass Normal characters with an animal motif, or they are superpowered characters based on animals In Name Only. This is also where you might find martial artists who name themselves after their Chinese sign or fighting style, and use names such as Tiger or Monkey.

Mythical Monster Motif: Does whatever a mythical animal can! These characters may invoke the other three types, but the one thing they have in common is that they are named after mythical animals such as dragons, unicorns, and gryphons.

All Animal Abilities: Does whatever any animal can! These characters can channel the abilities of almost any animal or possibly even shapeshift into one particular animal or another. Sometimes, they are limited to only one type of animals or have to be in the proximity of whatever animal whose ability they want to use, but it's not always the case.

Examples of Animal-Themed Superbeing include:

Bystander: What sort of costume is that supposed to be?
The Tick: 'Costume'? No costume, friend. I am, simply: The Tick.
Bystander: Well, you can't be 'the tick'. Ticks are arachnids: They got eight legs.
The Tick: ...How do you know I don't?
Bystander: Ticks suck blood. Do you suck blood?
The Tick: Uh... Yeah! I... Suck blood all the time!
Bystander: Yeah, right.
The Tick: Look! I got a straw right here, pal, you want a demonstration?!