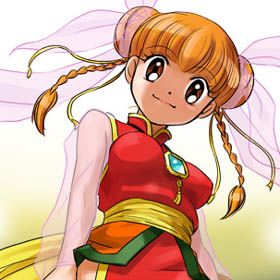 Ask Dr. Rin! (Ｄｒ．リンに聞いてみて! - Dr. Rin ni Kiitemite!, also called Ask Dr. Lin!) is a cutesy anime and manga that tries to combine aspects of two of the most popular shoujo series of all time, Fushigi Yuugi and Sailor Moon together with your typical middle school romance comedy. The plot at first follows the everyday life of Meirin Kanzaki, a 13-year-old girl with the power to predict the future using feng shui magic. In order to test her powers, she creates a Web site under the pseudonym of Dr. Rin. On that page she tries to provide fortunes to whoever happens to wander by. By the time the anime has started, the Web site has become wildly popular (so much so that it threatens to drive her father - a feng shui diviner by trade - out of business). However, the one boy who wishes that she would shut up every so often about fortunetelling, Asuka Yuuki, is Meirin's romantic obsession. The show switches constantly between being a romantic comedy and a magical girl adventure.