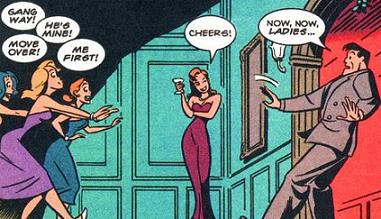 A chick magnet in his natural environment.

He's not The Casanova, he's not Kavorka Man, but he pulls girls in about as fast as they do, if not faster. It's probably a good thing he's too innocent to notice.

A Chick Magnet is a guy who just seems to draw girls to him like bears to honey. He can charm the pants off any girl, of about any age, without even trying, and he usually doesn't. He may not know just the right things to say to a girl, but says them anyway. This usually means he ends up with two or more girls vying for his affections.

But unlike the scoundrels mentioned above, even when he does finally realize the feelings of the girls around him, he never tries to take advantage of them. He usually ends up digging himself in deeper, because by this time, he's come to care for all of them, even if just as friends, and doesn't want to break their hearts, or lose any of them if/when he finally chooses the girl he really loves. This sometimes makes him look like a wimp in the eyes of some fans, especially those who have their own favorite girl, and usually don't share his concern for the others. Some fans may even question his sexuality.

If he is young and seeks out girls like Casanova, he's Kidanova. The Gender Inversion (and this trope's alternate title) is Dude Magnet.

Examples of Chick Magnet include:

Retrieved from "https://allthetropes.org/w/index.php?title=Chick_Magnet&oldid=1946196"
Categories:
Cookies help us deliver our services. By using our services, you agree to our use of cookies.