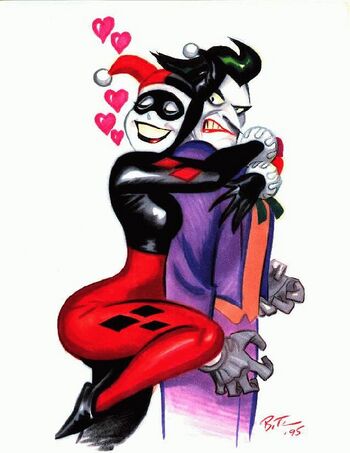 Truly the epitome of a healthy loving relationship.

Unrequited Love can hurt. A lot. That is, of course, assuming that the target of all those squishy pink emotions is unaware of them and the sender is painfully aware of this. Sometimes, though, the roles are reversed. The object of affection not only is perfectly aware of this one-sided crush, but actively tries to tell his erstwhile Love Interests that he isn't interested. Sometimes violently. The Love Interest, meanwhile, fails to get the very clear message, to the point that they go past mere Clingy Jealous Person and become what any sane person would consider a Stalker with a Crush, or a Psycho Supporter if they honestly mean no harm to the other party and also respect their ideas.

If the crazy person has terrible taste in suitors, then the "hubby" or "wifey" will abuse that unconditional love for use in their crazy schemes, and never hesitate to betray them if they fail, or if they get too whiny. Y'know, because whining can cause headaches and stuff. And of course, the innocent (or more like oblivious) kid will come trotting back for more punishment. If the kid has two neurons, they'll think their hubby/wifey has a "funny way" of showing love. If they have more than three, they'll realize that Mr. Troubled but Cute or Miss Broken Bird is just plain trouble and move on to someone else, trying to resist falling back to them.

Expect this person to be a headache for anyone in the center of a Love Triangle or Love Dodecahedron. Third parties trying to convince them they should move on will face replies like "You're Just Jealous" and other psychological barriers to reality and sanity.

This can happen to people of BOTH genders. It's more common to have females in the role, but it's not unheard of having males playing the part. Only that a female is more likely to be pitied, but a male will frequently become a Butt Monkey.

Compare with the more serious Love Martyr, whose unconditional love is presented (or at least intended) as genuinely selfless and noble instead of crazy, funny and/or stupid. Compare Minion Shipping and Unholy Matrimony. Further compare with Yandere. Contrast with Vitriolic Best Buds, where this involves friends. For Bonus Points, throw in some moments of affection going the other way, leaving watchers REALLY wondering what's going on.

Examples of Mad Love include: