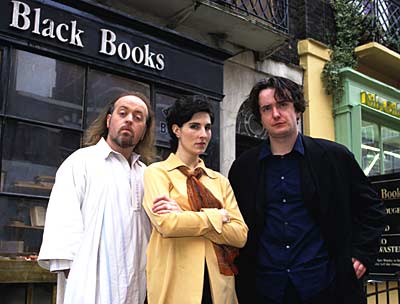 It was broadcast on Channel 4 between 2000 and 2004, starring Moran as Bernard Black, a foul-tempered Irish misanthrope who ostensibly runs a cluttered little London bookstore but rarely sells anything. (Because when people buy books, they also sell books, and then he'd have to order books, and sell them again, and all that's just miserable.) Instead, he spends his time chain smoking, drinking cheap wine and verbally abusing everyone who crosses his path, especially his relentlessly excitable, somewhat naive assistant Manny Bianco (Bill Bailey). Bernard's friend and (rueful) one-time lover Fran Katzenjammer (Tamsin Greig) has limited success in making him occasionally stop being a total prat, but as she herself is a neurotic pessimistic drunk she can only do so much.

Relied on A Simple Plan for pretty much all of its plots. The characters would decide to go to a party, or do their taxes, or write a children's book, or something, and would more or less use this as a springboard for a lot of bizarre and/or appalling behaviour, until they eventually failed, or at best broke even.

Tropes used in Black Books include:
Retrieved from "https://allthetropes.org/w/index.php?title=Black_Books&oldid=1765364"
Categories: