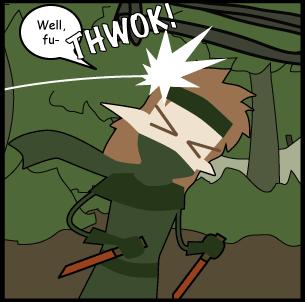 A character is part way through saying a rude word when they are abruptly interrupted, often for comic effect. Often, the interrupter will finish the curse with his/her first syllable. Likely began be a means of Getting Crap Past the Radar.

More common in post-watershed viewing, for obvious reasons, but family shows can also get away with it. Possibly related to the practice of censoring written swear words by blanking all but the first letter, the rationale being that the reader will understand the sentence without being offended.

This can happen in different ways:

The phrase "son of a..." is such a widespread variant that it's practically become a valid expression in its own right. Similarly, "why you little..."

For the non-cursing variety where important information is cut off instead, see Lost in Transmission. See also Catchphrase Interruptus. See also Subverted Rhyme Every Occasion, for the common case where a speaker sets up a rhyme to lead you to expect a bad word, then says something else.

Examples of Curse Cut Short include:

Irwin holds the s for a bit too long.

Cut to another scene

Or when he realizes that Goku's been training in multiplied gravity situations:

Or when he realizes that the earthlings have summoned the Dragon while he was asleep.

That was only in the clean version on Sci-Fi. On Showtime, she finishes the word.

Retrieved from "https://allthetropes.org/w/index.php?title=Curse_Cut_Short&oldid=1950975"
Categories:
Cookies help us deliver our services. By using our services, you agree to our use of cookies.