You Do NOT Want to Know 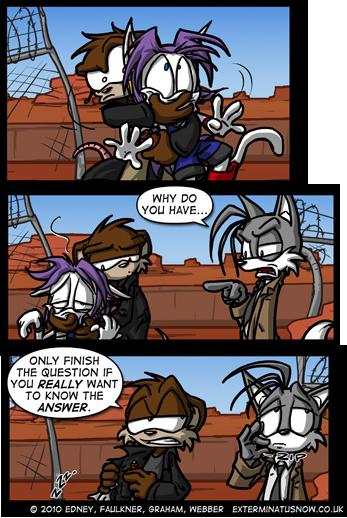 Some secret about Character A is mentioned, either by the character himself, or by somebody else. When queried, someone replies "You don't want to know. Just trust me on this." Or words to that effect. Whether we actually find out what it is varies - if we don't, it can turn into a Noodle Incident, and might be set up for one or more un-reveals. The characters who do know will usually try to avoid talking about it. More often than not, this phrase can just end up as Schmuck Bait.

In other cases, we do find out. If played for comedy, the secret will turn out to be relatively innocuous - or at least, not nearly as far-out as what the other characters - and probably the audience - have imagined it might be. If played for drama (as in horror movies) it'll turn out that the secret is, indeed, quite bad, and that the others would, in fact, have been better off not knowing.

A Genre Savvy person can start to ask, and then conclude that no, they're better off not knowing. If curiosity gets the best of them, it will be followed with "I'm afraid to ask, but..."

And sometimes, it's just Too Much Information.

If said by a mentor, it is likely to be an Awful Truth. If they experience enough such events, leads to a character who has Seen It All.

Not to be confused with These Are Things Man Was Not Meant to Know... even if, in some cases there may be some overlap.

See also Take Our Word for It, I Have My Ways.

Examples of You Do NOT Want to Know include:

Retrieved from "https://allthetropes.org/w/index.php?title=You_Do_NOT_Want_to_Know&oldid=1929789"
Categories:
Cookies help us deliver our services. By using our services, you agree to our use of cookies.