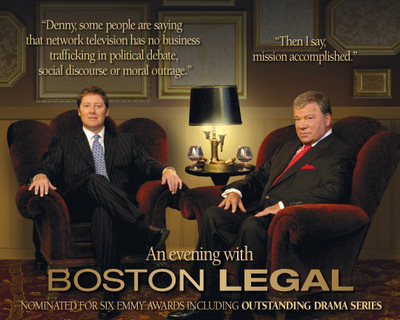 Yup, it's that kind of show.

Boston Legal was a legal Dramedy series than ran on ABC from 2004 to 2008. It was to the Bunny Ears Lawyer trope what House is to Dr. Jerk. The series starts as a senior partner at the firm goes completely insane and has to be hauled off to a mental hospital, and the rest of the employees aren't much more stable. They include a renowned trial lawyer in the early stages of Alzheimer's (affectionately referred to as Mad Cow Disease by him and the rest of the firm), several lawyers suffering from everything from extreme shyness to Asperger's Syndrome, and the lead, who is merely lecherous and corrupt (although he, too, suffers from occasional mental issues). Together they take on cases that are almost as odd as they are.

Created by David E. Kelley. Technically a Spin-Off from The Practice, with which it shares Alan Shore, Denny Crane, a few female supporting roles who were victims of Chuck Cunningham Syndrome or otherwise Put on a Bus, and virtually nothing else. It ran for a total of 101 episodes in five seasons.

Tropes used in Boston Legal include: