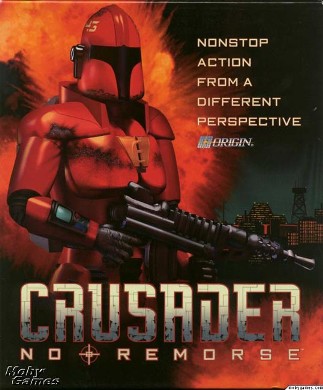 Caution: not Santa. Do not ask for presents.

The Crusader series was an early entry into the Third-Person Shooter genre. Developed by Loose Cannon Productions and published by Origin Systems as Crusader: No Remorse (1995) and Crusader: No Regret (1996), they told the story of a Silencer, one of the World Economic Consortium's (WEC)'s most elite soldiers.

Made of roughly equal parts Syndicate, Nineteen Eighty-Four, RoboCop and Star Wars, the story is as follows: in No Remorse, the Silencer's team is betrayed by the WEC after refusing an order to kill unarmed civilians, identified by their commander as rebels. The rest of his team is killed, so the Silencer betrays them and comes to the aid of the Global Resistance, who are trying to remove the WEC from their position of system-wide dominance. The WEC is getting close to tightening their grip further by completing the orbital bombardment platform Vigilance, which would allow them to bombard any point on Earth into rubble on a moment's notice through centralized control of nuclear-armed satellites and would itself remain safe by being a very small target well out of reach of conventional attack.

Naturally, as the first member of the Silencer Corps to ever defect, the Captain is greeted with suspicion, mistrust, and even outright hatred from the Resistance. This cannot be helped by the fact that the Silencer never speaks in game. Nonetheless, he uncomplainingly takes on missions it would normally take a team of Rebel operatives to finish, with only the equipment he can scrounge off bad guys, buy off an arms dealer, or steal from around the Rebel base and the trademark red armor of the Silencers to do it. (Presumably, the Rebels' quartermaster doesn't trust the Silencer enough to let him requisition stuff.) Complicating matters is a fairly well done subplot concerning a possible traitor in the Silencer's Resistance cell—which the Silencer himself is vocally accused of being on more than one occasion. No Remorse ends with the destruction of the Vigilance platform and the Silencer floating away in an escape pod.

No Regret opens 48 hours later when a supply freighter heading for the moon is diverted to search for survivors of the Vigilance platform's destruction. They of course find the Silencer, adrift in his lifepod and presumably getting the shakes having not killed someone in two whole days, who proceeds to come capture the freighter, blow it up from the inside out, escape to WEC's lunar base, and break out of his dejected funk. There the player learns how critical the moon is, as Di-Correllium (or Di-Cor), a radioactive mineral with half of all known deposits found on the Moon, is responsible for most of the Earth's power supply.

With the Silencer's help the Resistance takes over the Di-Cor mines, kills a major WEC executive and puts a stranglehold on the WEC's supply of Di-Cor within a week, threatening their control of Earth. Follow-up games were never produced, though depending on which source you talk to anywhere from one to four more were planned.

Both Crusader games used a modified version of the engine developed for Origin's own Ultima VIII, providing an isometric 3rd-person view on the Player Character not unlike that of Diablo. The game featured pre-rendered sprites instead of 3D accelerated polygons generated on the fly. These graphics still hold up nicely today, especially when their age is taken into account.

The Silencer has a vast array of weapons he picks up (or, in the first game, buys from Weasel, an arms dealer sympathetic to the Resistance), from assault rifles, shotguns and grenade launchers to lasers and UV projectors to, in the sequel, inventively vicious weapons like the liquefier and the crystallizer. While the graphics aren't high resolution enough for it to be truly horrifying, the Silencer's more exotic weapons were delightfully gruesome when used against humans. No Regret in particular was somewhat notorious for the number of ways humans could die—which included being shot, set on fire, frozen (and then, if you wanted, shattered), blown apart, melted, reduced to a puddle of non-differentiated grey-green goo, and having the flesh burned off one's skeleton. Ruptured high-pressure chemical lines could also freeze people or light them on fire if they wandered into the leak.

Combat was done with weapons only, though a skilled player could make use of demolitions equipment in a pinch. If in the harder settings you ran out of ammo, energy, or ordnance, you couldn't kill anyone until you found some more. This could be very difficult, as most of the Silencer's supplies were either stripped from dead opponents or taken from storage areas that were heavily guarded. It was also somewhat strange, as literature from the second game indicated Silencers were highly skilled martial artists, and the character could certainly pick up the equipment to survive to close combat range.

The controls were good—though they took a little getting used to, the system was perfectly logical—allowing for an impressive array of diving, rolling, strafing, and just plain walking and running (though jumping was pathetically hit-or-miss) and it was easy to see where you were aiming, thanks to a targeting reticle drawn on the screen. Hitting things that were off screen was a problem, and you often found yourself wishing for a way to move the camera independently of the Silencer. On the other hand, enemies that shouldn't have been able to see you generally didn't react until you scrolled into their screen, but could still be killed by you if you knew they were there.

Cutscenes used a mix of live actors and computer animation, though never at the same time. The budget for the live action was apparently somewhat small, as among other things the costumes for the WEC soldiers are laughably bad when seen on real actors. As with most FMV, the acting wasn't particularly good—in fact, in No Remorse, it was pretty horrible, though No Regret was at least not embarrassing for those involved.

The game was knocked for omitting multiplayer which, while not yet easy to use, was becoming commonplace by 1996 (when the second game was released). The next game in the series was supposed to have addressed this, and in fact the only known promotional screenshot features multiple Silencers, each in a different color of the familiar armor in the way of deathmatch shooters at the time, running around and killing each other (one of which was using a new weapon, apparently a flamethrower).

The games' music was rather advanced for its time, consisting of high-quality .MOD files, a step or two below CDs or .mp3s in quality. The game also had an all-but-undocumented "jukebox" feature, allowing you to switch through the games' tracks in the midst of gameplay. The tunes themselves were generally well-done rock/techno.

The first two games have become available from gog.com for a nicely cheap price.

Tropes used in Crusader: No Remorse include:
Retrieved from "https://allthetropes.org/w/index.php?title=Crusader:_No_Remorse&oldid=1754726"
Categories:
Cookies help us deliver our services. By using our services, you agree to our use of cookies.