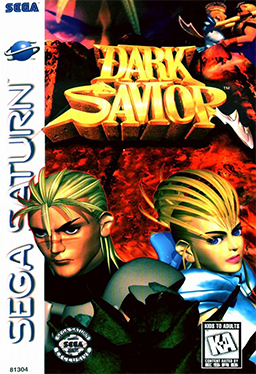 A Saturn game released in 1996 (1997 in Europe), Dark Savior was a Spiritual Successor to Climax' earlier game Landstalker. It does, however, not have anything to do with it.

Rajeen Bounty Hunter Garian (Ryu-Ya in the original) is on board a prison transport ship headed for Jailer's Island, transporting the incredibly dangerous creature Bilan, who of course escapes during the journey and Garian has to hunt him down. Depending on how long the player takes to complete the introduction part of the game, they move on to one of three "parallels", taking place in the same world and sharing plot elements, but also having significant differences - for instance, almost every part of the plot on Jailer's Island in the first parallel is directly caused by Bilan's escape, but to get to the second parallel you have to catch up with and kill Bilan already in the introduction, changing the story dramatically. Complicating matters is the Jailer's Island Warden Kurtliegen, who uses prisoners for slave labour to mine the dangerous substance Bilanium. The Lavian ninja Kay is a central character too, and is the one given the most different characterization in the three possible timelines.

The game has an overarching theme of different realities and living different lives, something which comes full circle in the fourth parallel, following directly after the third.

Of interesting note is the fighting system in the game - when any major enemy is encountered, the game shifts into more of a fighting game, complete with two rounds. A weakened enemy that has been knocked down in the second round can be captured and used in future battles.

Tropes used in Dark Savior include:
Retrieved from "https://allthetropes.org/w/index.php?title=Dark_Savior&oldid=1574214"
Categories: