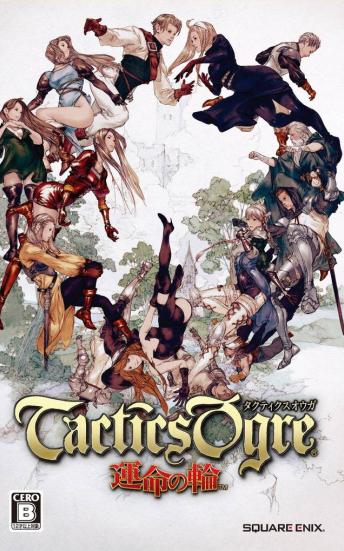 Fear is only the beginning. Fight it out!

A game in the popular Ogre Battle series, Tactics Ogre: Let Us Cling Together (Episode VII), was the final game by Yasumi Matsuno at Quest before he left for other pastures. Tactics Ogre differs widely from Ogre Battle: unlike its Real Time Strategy predecessor, it does not take place on Xenobia, and it is a Turn-Based Strategy game which focuses on a much smaller group of people.

Tactics Ogre's story follows Denam, his sister Catiua, and his friend Vyce as they join a rebellion against a totalitarian regime run by Cardinal Balbatos. They soon are caught in the web of political intrigue, and are forced to make unimaginable sacrifices for the freedom of their kinsmen. The storyline has multiple branches, and the choices Denam makes effect the state of the world around him, and the fates of him and his friends. It touches on the themes of class warfare, democratic reform, etc, and continues in the direction throughout, unlike its many counterparts which swerve into the direction of Magic Stones.

This game was very popular in Japan, for its story, and well-executed, if different, gameplay. Its reception in the West was a little poorer, though; it was released on the PlayStation in the wake of Matsuno's next game, the rather successful Final Fantasy Tactics, and was perceived to be a shallow copy of a game which was, in actuality, its own Spiritual Successor. A remake for PSP was announced in July 2010, re-subtitled Wheel of Fate in Japan but keeping 'Let Us Cling Together' in English. Its original release achieved cult status at best in America, but the re-release got great reviews, with some even preferring it over Final Fantasy Tactics.

Tropes used in Tactics Ogre include:
Retrieved from "https://allthetropes.org/w/index.php?title=Tactics_Ogre&oldid=1726068"
Categories: